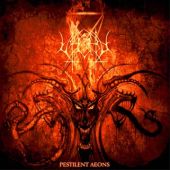 Black as the center of the earth, the album: "Pestilent Aeons" from Viscera dives you into a dark and pain filled world that most would fear to venture even once. With every brimstone fire burning higher and higher, Viscera clearly shows ever demonic blast of pure Black Metal fury on it.

It intrigues me that such a brilliant and dark band like this is from a place that is so opposite as North Dakota... but being from a small city myself in the wide open spaces of Canada.... It is not shocking. If it made me realize anything right off the bat, North Dakota has made this band the way it is and they are neither ashamed or embarrassed in any way by it all. The band seems to have come through just fine.

Songs like the brilliantly heavy title track which assaults you right from the first blasting note to the soul searing ending, to the brilliantly penned Demonic classic ‘Black Altars’.... the outcome has become so damned clear. Viscera is a band that is on its way to taking over the top spot on the USBM heap, all the while killing every pitiful EMO band it crosses for the pure fun of it.

The only critique I can actually give is that the recording of the disk could have been better in many spots... but that aside, the album still has its dark and purely blasphemous charms just the way it is... so in the end, it does not hurt my thinking too badly. It does lower my rating a notch or two, but it never even touches my excitement with this band. They are what I look for in a great BM band.

Perhaps the black metal label, Southern Lord Records, could wake up and sign these guys, it would be a very smart thing to be doin’... They have to - total blasphemy like this is a terrible thing to waste.