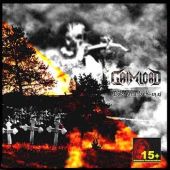 Grimlord of Poland present the metal public their second full-length album "Dolce Vita Sath-anas". This is an album where guitars do more of the talking than the vocals. Grimlord’s sound retains a lot of traditional Heavy Metal qualities while incorporating blast beats and other accents outside of what would be deemed a strictly traditional sound. Take note, when I use the term ‘old school’ here I’m talking about the spirit of the music as well as Grimlord’s style. It’s not particularly dark, grim, extreme or depressing. Grimlord aren’t out to prove how dark, depressing or evil they can be, they’re just out to play great Melodic Heavy Metal, which is more fuckin’ metal than anything else.

The opening track ‘Dolce Vita Sath-anas’ begins with an interesting sample that is completely appropriate for your kid brother’s Black Metal band or an 80’s fantasy arcade game. Grimlord retains a mood much more appropriate for the latter option, but there are points in this album that echo back to the ashes of the Black Metal band Grimlord rose from. ‘Ancient Land of Ys’ could be taken from "Dolce Vita Sath-anas" and plugged into any number of Black Metal albums out there.

The first third of this album is tight, catchy and the only part that features vocals. Barth la Picard’s vocals may not fit everyone’s taste, they’re certainly not typical, however they have a particularly charming quality to them that I can only compare to Sabbat’s Martin Walkyier. Its unfortunate vocals are not used at all in the rest of the album. After ‘Oh! My King!’ its all instrumental and the songs almost completely lose traditional song structure. This is not to say these are bad songs though, if you want to have something playing in the background that isn’t distracting but is also not going to put you to sleep the last 30 minutes of this album is perfect.

Grimlord has put together some really great stuff here, they could tighten up and take advantage of the structured songs they had going on more, but that doesn’t stop me from suggesting this to fans of traditional and/or Power Metal.