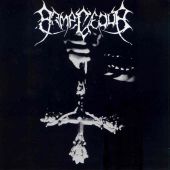 Buy on: Bandcamp
Type: Full-Length
Release Date: 2003
Label: Agonia Records
Genre: Black
1 Refuse The Blood Of Jesus
2 Only True Believers
3 Emperor From The Eternal Dark
4 For I Am His Slave
5 Poetry From A Poisoned Mind
6 Demons
7 FTW
8 Endless Fields Of Sorrows
9 Night Of The Triumphator

We all know the essential ingredients for a strong black metal work. Of course, I am speaking about “true” black, so symphonic, depressive, progressive, suicidal, pagan or “green” black metal is not my topic. And apart from its general aura of hostility and misanthropy, true black metal always profits from a really vile and mangy guitar tone. This is exactly where Armagedda’s record from the year 2003 scores impressively. As soon as a seemingly senile Hallelujah singer has to shut up, the guitars spread an atmosphere of total perfidy. By the way, they are just the best element in a production that meets the thin line between soulless high budget recordings and stupid low-fidelity mumbling.

I admit that I did the band wrong after the debut. It did not convince me and so I lost the trace of Armagedda. But maybe I should listen again to The Final War Approaching, because one thing is for sure: its successor is a very exciting feast of black metal. Its purity, its stubbornness and last but not least its songwriting makes it to an outburst of negative energy I like much more than I thought I would. There is aggression, there is hate and there is putrefaction, but the trio also knows the importance of genre-specific melodies and it also keeps an eye on memorable parts to a certain degree. This intelligent way of proceeding results in surprisingly strong numbers like 'For I Am His Slave', which appears as a combination of Darkthrone guitar lines (“Ravishing Grimness”) and Hellhammer / early Celtic Frost heaviness.

By the way, grimness is another word that comes to my mind when I listen to Only True Believers. The album with the simple yet unambiguous artwork convinces with its coherent overall design. The homogeneity of the material forms an almost monolithic listening experience. Given this situation, the album reveals its full strength and aroma whenever the listener is willing to hear it from the beginning to the end without interruption. I mentioned 'For I Am His Slave', but it is nearly impossible to pick out tracks that leave the other ones behind. Naturally, the sick and catchy riff of the title track keeps sticking in the ear immediately, but all pieces reach a remarkable quality level. Even the atmospheric, keyboards-imbued outro, aptly titled 'Ghostwood', adds value to the album. Okay, five minutes is a bit too much of a good thing, but who cares.

To cut a long story short, Armagedda prove style, class and spirit with the here presented nine songs. The core of black metal (and I know no one would ever have though this) is black, pitch black and Armagedda remind us of this fact with a dynamic, very cleverly arranged album. Finally, the guttural voice of the lead singer and the passionate drumming also leave their footsteps and so I see no reason to give less than 8.5. Check out murderous tracks like 'Poetry From A Poisoned Mind' (some sick vocals stand out here), if you don’t believe me. True believers, but only true believers, can trust me blindly.