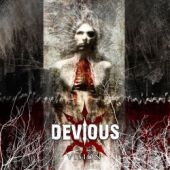 I believe I'm the first one to review Devious on pages of MetalBite.com so let me quickly introduce a band that I've been listening to for some time now. Established in 2000, released EP and two full lengths, and after some band members shuffles or in-and-out's, they record "Vision". Album has been put out by Deity Down Records, a label that evidently everyone should be checking out.

After what seemed like way too many listens I decided to take a break from Devious and try to think about all of the elements of their music. I tried to understand what is it in there that draws me to them, that makes me hungry for more and what is it in there that I have to play "Vision" again and again. I almost started to create a list of things that I like but couldn’t really find anything to write in the dislike section. Devious is good. "Vision" is good. “Good” is not good enough of a word!!!

Devious' "Vision" is a relentless, hungry, maniacal beast. A beast that will swallow you whole. For any of you out there that are on the look out for something amazing - this is it! Intense Death Metal fueled by Thrash (with small portions of Black), Groove and then some sporadic symphonic keyboards for atmosphere enhancement (Darkane comes to mind). Saying how well everything is played is somewhat pointless and will not bring you any idea of what is going on, so I would recommend getting the album to experience their craft yourself.

Every song brings different elements to the album. Some of them bring intensity and speed, some groove and mood; some are very technical and structured. None of them stick to one formula switching between tempos, sections and musical approaches making the album very diverse and interesting. All of them unique, memorable and ass kicking – each in their own way. All arrangements were very well thought through (obviously!), balance was found and all energy harnessed to be later released on unsuspecting listener such as myself. Instrumental execution is simply flawless, production clear, dynamic and juicy, overall mixing near perfect.

Devious has created an album that is going to be out there to be an example. Melodic yet brutal, technical yet simple, massive yet clear. They've created an album that just might set new standards in Death/Thrash Metal. Modern, exiting, addictive, groovy. They put themselves way ahead of the pack and I hope for them to stay there and lead the way. Well done Gentlemen! Very well done!!