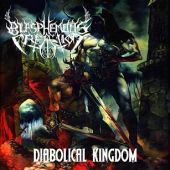 A sound that’s quite similar to early Slayer circa "Show No Mercy" or "Hell Awaits" is emitted here and with it comes all the energy you’d expect. The band enjoys the music they play and it shows through greatly in their metal approach. There is clearly a need to play a fairly straight up, harsh attack and it works fairly well for the outfit. Blasphemous Creation performs fairly raw Thrash that doesn’t have much technicality to win you over, so instead tries to do the job with a catchy approach. They’re somewhat successful at creating a tone that has a very free for all personality and this is probably the best part of their music. 'Burn In Hellfire' has a catchy hook and is one of the standout moments to be found here.

Blasphemous Creation is able to sound fairly similar throughout without many moments to differentiate the pack. This is good to a certain extent, but one wishes they would try something a little more interesting at times. They have some personality, but not enough of an ingenious element to stand out and really catch your attention. The band lacks some of the push that made classic Slayer such a treat to listen to. They certainly attempt to make up for their slight shortcomings with just an easy to appreciate type of style that will have some metal fans banging their heads for certain. The positives to be found on "Diabolical Kingdom" outweigh the negatives and we’re left with a solid platter on the entirety.

The guitar playing is solid, though not unbelievably mesmerizing and the band come together quite well as a unit. They don’t let up on the tempo at any point of the proceedings and simply keep the pedal to the metal at all times. The album is enjoyable and that is one of the only things that matters in the end. From the beginning to the end, the amount of passion put into the music is kept pretty constant. Blasphemous Creation come recommended to fans of a rawer Thrash sound.