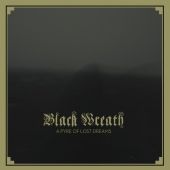 Black Wreath’s debut album "A Pyre Of Lost Dreams" is the sooty din of Hadean landscapes and folk aesthetic dipped in the bedside candle wax of 18th century romanticism.
Track one ‘Black Holes Of Your Mind’ is a melodic traipse through Elysian Fields. The guitars ring like pallid bagpipes before they plunge down seaside cliffs to enter a grieving house on the edge of a voiceless village.
Second track: ‘Nocturnal Dominion’; again, simplistic depressing beauty. It is the soundtrack to a vain search for the Northwest Passage. It is that point where the ice-bound ship depends on its saline captor to stay above sea level. The last wretched tin has been eaten. Fuel to heat the ship is low; and there is no one and nothing to hear the dying sighs. Those who bother to step outside see only the naked sun and infinite glistening frost-land-nature’s cruel beauty.
‘Solitude Rising (Missing All Exits)’- lack of use on keyboards makes this track far less narrative for this listener, much more like a thought process, possibly that of a dying mariner? The ending of this track is the disintegrating remains of the sunken ship’s scripture.
The final track ‘Nidstong’ is a short and extremely simplistic track. Though I love simple emotional music this was just unneccessary. It seems more like a last minute add-on, not to mention I really can’t justify the intensity of the idea of the nidstong (AKA nidstang) with this track. Aside from that opinion, "A Pyre Of Lost Dreams" album is any Funeral Doom fan’s wet dream. For fans of Esoteric, Funeral, Thergothon, God Speed You Black Emperor, or the specifically ‘Cascadian’ bm sound.