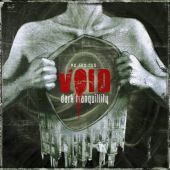 My first exposure to Dark Tranquility was way back in 1996 with the Enter Suicidal Angels EP and I thought it was brilliant, thereby leading me to The Gallery, The Mind’s I, and Skydancer, all of which I found equally good. When I hear the term “melodic death metal” I think of some emo kids in the mall playing two chords and screeching into microphones at ear-splitting volume. It’s sad but true. DT had once owned that particular subgenre and kept it somewhat pure and unsullied, but I’m still not sure what to make of We Are the Void to be perfectly honest. It’s a good album to listen to, but I would think that aside from the vocal delivery the “melodic death” tag no longer applies here. My only fair comparison is Metallica’s Load: it’s a fine album in and of itself, but not a Metallica record, plain and simple. I think the same goes for We Are the Void. I’m sorry to say this is as close to mallcore music as one can get without flopping one’s hair into only one eye.

On the surface it appears that DT has progressed, yes, but there’s progression and then there’s the foregoing of your own self, which has happened here. As I say, the album sounds pretty good for some “groove metal” that is somewhat enjoyable and well-crafted within its parameters, but as far as a Dark Tranquility CD it’s short of that former acceleration and flexibility that made them so good once upon a time.

The songs are well-structured, nicely played, and abound with somewhat memorable, albeit transparent melodies. Still, it’s very difficult to render this album high praise simply because the transition from one sound to another is almost too drastic. If not for the vocals a couple of the tracks actually sound radio-friendly, even power metal with heavy keyboards and melodies more akin to Nightwish or Rhapsody than the band that once issued “Zodijackyl Light.” I must admit the keys on this album utterly killed me! They are far too prevalent and I keep imagining power metal bands all over the place, a very unpleasant occurrence for me.

I hasten to use the term pedestrian as I seem to use the word a bit when describing something not up to par with a band’s ability or past achievements, but this release is so commercially-geared it’s almost saddening. The track “Her Silent Language” sounds like a bad Bauhaus-meets-extreme-vocals hybrid to be taken seriously. In my opinion it reeks of a go-with-the-flow mentality, one that should never have been realized considering the band’s past successes. The closest track to the old feel is “I Am the Void,” which manages to blast the ears like a sledgehammer, but right as you’re getting into the feel of Dark Tranquility the way they deserve to be heralded the keyboards come in and dismantle the aggressive emotional knot just as quickly.

While musically brilliant in its own way, We Are the Void spans too far an emptiness to be called a simple void. The leap here is more like an infinity journey that doesn’t fare well for the long haul.