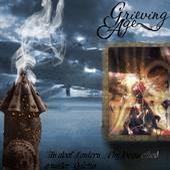 Grieving Age is an unsigned Doom-Death act from Saudi Arabia. Their demo "In Aloof Lantern, Thy Bequeathed A Wailer Quietus..", sounds like an unsigned Doom-Death act. There was really no going outside of the box as it seems they adhered too blindly to the genre they were going for. This demo is barren of anything that's never been heard, and there was no single riff that caused me to perk up my ears with more focused attention at any point.

The vocals lack the oomph to back up the 'size' it's trying for, in turn making it sound like a strained and oxygen-depriving experience for the vocalist. The length of the tracks don't enhance the feeling or psychological affect of the songs, rather they seem to serve the never-ending stream of fanciful lyrics. Aaron Stainthorpe seemed to have gotten quite happy with the Photoshop here, collaging pieces of surreal elements together and having a blast with the light-altering functions of the program. Though like the album itself, his vision didn't quite translate with any measure of success.