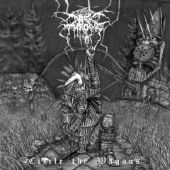 ::   ::
Type: Full-Length
Release Date: April 5th, 2010
Label: Peaceville Records
Genre: Black
1 Those Treasures Will Never Befall You
2 Running For Borders
3 I Am The Graves Of The 80s
4 Stylized Corpse
5 Circle The Wagons
6 Black Mountain Totem
7 I Am The Working Class
8 Eyes Burst At Dawn
9 Bränn Inte Slottet
MetalBite on YouTube

Whenever I think of great Darkthrone albums, outputs like Transylvanian Hunger, The Cult Is Alive or Ravishing Grimness come to my mind. By contrast, I have never been a big fan of Circe the Wagons. I cannot easily say what is missing on the 15th studio album of the well-known duo. It holds two highlights, the opener and the title track, but the remaining material does not shine with an overdose of compositional brilliance.

In general, the album has more in common with its predecessor than with its successor. In other words, wide parts of Circle the Wagons deliver a metallic mishmash. Some black elements liaise with rather unorthodox vocals, mid-paced rhythms and relatively dense guitar do not result in aggressive songs. The tracks reach a solid level of density, but they lack outstanding riffs and a healthy dose of insanity. It seems as if Fenriz and Mr. Culto want to pay tribute to all of their old heroes and therefore we are listening to comparatively traditional songs which have taken a bath in the bathtub of this old bugbear called Lucifer. Coherent and pretty strict leads that shape the end of the title track remain more or less exceptional. Instead, quite powerless tunes gain the upper hand. I cannot identify clear structures and the songs just pass by, sometimes decent, sometimes faceless, sometimes suffering from the vocal performance. One can describe the vocals as individual, but one can also say that they are just grotesque. Don't try to sing professionally as long as you are much better in barking, nagging and screaming.

Another handicap is that the choruses do not really work. "I Am the Working Class", for instance, builds a bridge to some traditional punk bands in view of its simple, relatively melodic guitar leads. Love it or hate it, but the chorus of the song appears as the result of an accident. By the way, the riffing and drumming of this track lies not too far away from the title track and this form of double utilization has never been a good idea. The fairly dull and somewhat uninspiring sound supports the feeling of uniformity. Yes, there are some aggressive, more belligerent parts on the album, but you have to search for the needle in the haystack if you want to find them.

What was the intention behind Circle the Wagons? Did they plan to record just another Darkthrone album in order to be back? Unlikely. On the other hand, have they really been of the foolhardy opinion that the here presented compositions have the power to challenge their classics? Once again: unlikely. Darkthrone once stood for unbelievable misanthropy, for innovative ugliness and bestial sound experiences. Circle of Wagons avoids any form of extremes, if we ignore the fact that Darkthrone's music always sounds extreme for 98% of the world population. It is no coward full-length, but it also does not reflect spontaneity, inventiveness or the will to step out of the comfort zone. Fenriz delivers a list of must-have albums in the booklet where the perfect "Protectors of the Lair" (Griffin) is mentioned, but his own record is light years away from such a classic. This is a little bit disappointing, although there are no total flops on the album. But we know that the Norwegians can do it much better. Untouched potential is always a waste of resources. Guess it's time to listen to Hate Them or one of the albums I have mentioned in the first paragraph.