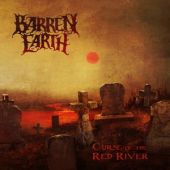 Barren Earth performs a style of metal that is very influenced by Amorphis and this is readily apparent on Curse of the Red River. The band’s first album proper does a good job of mimicking that band’s sound, but there is enough new on display to make for an entirely interesting listen.

The music here has a folk element, but one that is slightly different than the one that Amorphis applies. Instead of the one seen on Elegy, for example, the band employs their own traditional style to the music to give it a character all it’s own. The songs are bombastic in their folk element and add a lot of guitar layering to the mix.   This can be seen from the track Our Twilight which features clean and harsh singing in equal measure and makes for a good early album highlight. The album continues to march along at a nice pace and puts the folk influence strongly in the tracks. The music is something to be uplifted by and very nice overall. It is melodic, yet features a nice dual interplay between styles and vocal types to add diversity and dynamics to the mix. The melodic portions are strong and really make an impact on the listener. This is felt through the guitars, which have a nice presence and are one of the better portions of the musicianship. The equally powerful vocals soar above the music and give it a nice character. The drumming finishes the musicianship elements and though it isn’t as strong as the guitars, it does a nice job providing the backbone to the tracks. The overall instruments and vocals of the album are stellar.

It is the song-writing which is slightly more suspect. The band bested the songs of this album on their very next album and though they are extremely solid, it comes up a bit short of that effort. This is still a very powerful album of folk influenced metal.