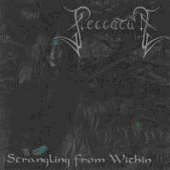 Type:
Release Date: 1999
Label: Candlelight Records
Genre:
1 Where Do I Then Belong
2 Speak Of The Devil (As The Devil May Care)
3 The Change
4 The Song Which No Name Carry
5 The Sand Was Made Of Mountains
6 I Breathe Without Access To Air
7 The World Of No Worlds
8 And Pray For Me
9 An Ovation To Art

When I first heard of Peccatum, I was VERY excited. I saw them in an issue of Terrorizer while visiting England. A few months later, I actually found the CD in my home-town HMV. I was overjoyed to the point that I denied how disappointed I was.

The most unique thing about Peccatum is the use of vocals. Ihsahn (of Emperor), Lord PZ and Ihriel all have good voices for what they do. Ihsahn's growls and screams are top quality, and the others have great classical singing voices. But the "operatic" style makes the overall impression that of a macabre Andrew Lloyd Weber musical. Ihriel's screams and wails remind me, at times, of the sound effects tapes that some houses play on Hallowe'en. Hearing the men singing in harmony, at a very high pitch, reminds me all too much of the 1980s. This wasn't the metal I was expecting.

What would have worked for me would have been a normal female singing voice - no need for the inarticulation of the operatic style. I find that style significantly less emotional than a straight-up singing voice. This is, I think, "Strangling From Within's" greatest flaw.

Musically, it's quite proficient, but hampered by what seems to be muddy production. The guitars are well played. Tight, if not memorable riffs. I can't hear any bass, but I'm sure it's there, it has to be, right? The drums are programmed, I believe. They do sound that way, at least. The double-bass sometimes goes faster than you'd expect, and the cymbals do sound a little tinny. The synth-noises are clearly synth, but that's the case with most classical-metal. But enough of me griping - the music is good. I just wish the production would separate it and give it a little more dynamic frequency range.

The songs plod along at a nice tempo, languidly drifting in and out of faster passages. The amount of repetitiveness is just right, and the transitions are well placed. The entire album is very atmospheric, creating a swirling world of flowing voices and instruments. Conceptually, this album is great.

It says in the liner notes "Peccatum performs art for the sake of art." I respect that 100%. I enjoy what they tried to do, and would likely buy another album if the production and execution could just be cleaned up a bit. The song titles' translations seem to need a little work: 'The Song Which No Name Carry' - not sure what that means. The standout track for me is track 6, 'I Breathe Without Access to Air.' It has the most memorable beat and riffs, and is generally the song I can most get into. The closing track, 'An Ovation to Art' is a nice little instrumental, fitting of a film score.

Bottom Line: Now, if you can handle the operatic vocals, most of all, then I'd recommend this album. Otherwise, steer clear of it - Go to the members respective bands to find their work.

Rating: 5 out of 10 - reduced primarily because of the vocal work which, while well performed, does not fit the music.

This is one of the most original, and all encompassing records ever seen throughout metal market. “Strangling From Within” tries to incorporate essentially every element ever present throughout black circles and classical compositions, and then tosses them all together. What is the end result? A seething tide of chaos just waiting to be released.

The original concept behind Peccatum was in formulative stages by keyboardist and vocalist Ihriel, to make the concept truly work she pursued the enormous talents of Ishahn, vocalist, keyboardist, guitarist and bassist of renowned extreme black act Emperor. To accompany Ishahn was Source Of Tide member Lord PZ on vocals and guitar.

Depicting what the music on “Strangling From Within” tries to accomplish is impossible. Fusing elements from classical 16th and 17th century violin accomplishments strewn together with typical and untypical inextricable black elements, Peccatum take head on what no-other band before them has even tried to attempt. And Peccatum succeed is doing whatever they attempted to achieve. You may have noticed that I’m unsure what Peccatum strive to do with this album, it's nearly impossible to fathom what concept is portrayed within “Strangling From Within”, only that it’s unique, extreme, severe, melodious, clean, harsh, beautiful, harmonious, and symphonic metal (term thrown about carelessly in this circumstance) stuff.

Favourite tracks from “Strangling From Within” are ‘Speak of the Devil (As the Devil May Care)’ which is one of the most severely messed up tracks I’ve ever heard, igniting lovely piano pieces, cool power metal-ish guitar riffs, that aren’t really power metal, with David Bowie-ish vocals, and simply wicked lyrical lines, that sound like a fairy tale is being woven through dark powers, ‘Speak of the Devil (As the Devil May Care)’ is an awesome track. Also of note is ‘And Pray for Me’ which has the musical elements famously portrayed through circuses and carnivals as a frame for these dark musicians to weave their tapestries upon.

Bottom Line: If you can get your head around the themes “Strangling From Within” tries to envelope, you may just have stumbled across one of the greatest releases of the year. If not, then you still have a distinctive and cataclysmic release sitting in your hands from Ishahn and Co.