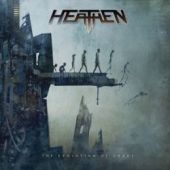 During the last month, I have been immersing myself into Heathen's music, mainly motivated because of the release of their upcoming album. Breaking The Silence was not totally an album that I enjoyed much, but Victims Of Deception, even with its failures, is a devastating album that made me headband as a mad manduring a lot of times. After listening to them, I completely lost the track of the band, and as I had no way to listen to this album previously (mainly because I didn't want to pirate it), I never could check The Evolution Of Chaos. For some reason, I expected a brutal release, something glorious, something that made me say "OMG! This album is INSANE!", and I think that expectation was probably fruit of all the positive opinions that many fans of this band gave, so I thought "if Victims Of Deception was awesome, this one should be a bestial release". Once I got a subscription for a streaming service (I won't tell the name as they don't pay me publicity), I took my (only) best pair of earphones to prove all those reviews right or wrong.

Ladies and gentlemen, this album is GREAT! (in its majority).

And let me explain myself quickly. I found two of the songs of this album bland and at the height of the rest of the songs; I'm talking about 'Arrows Of Tomorrow' and 'Undone'. I consider these tracks the bumps of the album. 'Arrows Of Tomorrow' feels like an unsuccessful way of making a mainstream-like song with simple riffs and a bland melody that is not memorable at all; the strength of the album is lost a little and it feels like if the album has an extra unnecessary song. 'Undone' suffers from the same; it's a slower song that feels boring and its main riff is repeated a lot of times during its duration; of course, the solo of the beginning is ok, but it doesn't worth listening to it just for a little solo.

Ok, now that I've pinpointed the worst tracks of the album, let's start with the good stuff.

'The Evolution Of Chaos' starts really well. After a curious intro that reminds me of the one from 'By Inheritance' (that Arabian influence can be smelt from kilometres beyond), the madness begins. The first two tracks of the album are an absolute festival of thrash with a crystalline and elegant production, as the guitars don't sound too dirty or distorted, and that gives the music a touch of elegance and class. The riffs are strong and greatly performed, as well as the solos; Doug Piercy was not a member of Heathen to this point, but Kragen Lum does a great job executing mind-blowing solos, full of technique and virtuosity, as does Lee Altus. This is soothing to remark. Throughout the album, this kind of solos are present, which will be the delight of those who are fans of shredding. Back to the tracks, they are some of the thrashers songs in the album. They are fast, headbang-worthy, with an impeccable battery execution (with more presence than in Victims Of Deception, by the way) and they give us a demonstration of how David White's voice has matured with the time; not only does he keep his voice practically intact, but also it sounds even more aggressive owing to the harsh touch that he shows off now. It's a pressure listening to him so good after a long time. These kinds of aggressive tracks are not the main dish of the album, but the album is not devoid of them; 'Bloodkult' and 'Silent Nothingness' follow the same line of the first two tracks and continue with the festival of riffs and velocity.

However, not everything in this album is totally thrash, let me warn you. Heathen is back with their more ballad-like tracks that show the mastery of the band of doing this. 'A Hero's Welcome' and 'Red Tears Of Disgrace' are those tracks, which reminds of a song like 'Prisoners Of Fate' from their previous album, more oriented in the melody instead of aggression. While the first one goes on with this melodic tendency until the end of the song, the latter one evolves into a climax moment full of more riffs and spectacular solos, courtesy of our two star guitar players. But maybe the most ambitious track in this aspect is 'No Stone Unturned', which demonstrates better that not everything must be savageness into a thrash song, but it can be more mid-paced, but gripping and full of feeling thanks to its guitar melodies, it's pace reminiscent to a track like 'In My Darkest Hour' and different sections that show the mastery of the band as composers.

As you can see, I'm more pleased than anything with this album. However, before I finish, I want to mention another negative aspect that I found: the bass guitar.

For some reason, the sound of the bass guitar was, again, buried with the sound of the guitar. Yes, I told that the guitar sound was elegant as it was not very distorted, but that's also a problem, as due that the bass is almost imperceptible at most of the album, I felt the sound a little improvable, as by having a more prominent bass sound in the mix, the album could have felt more powerful and overwhelming. At least in Victims Of Deception the guitars sounded powerful and the lack of the bass sound was compensated (just a little) by that, but on The Evolution Of Chaos, I felt it needed more of the bass sound. This aspect is (a little) solved in the 10-year anniversary remastering, but as I'm judging the album taking into account the original version, I felt prudent mentioning this aspect.

And I think that's everything. I won't talk about the lack of real technical riffs anymore since I feel I've extended a lot with this topic in my previous reviews (check them out is you want to know what I'm talking about).

To conclude: The Evolution Of Chaos is a superb revival in its majority. It has two not-very-impressive songs, but the rest of them are glorious in many aspects; the album is both aggressive and melodic in its due time, it has grand solos, an elegant sound and production (although it could be a little better), a better version of David White's voice, memorable moments and two of the most talented guitar players I've listened to. Hopefully, their upcoming album can be even better; let's expect a better one.