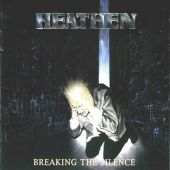 Before talking about this album, let me introduce you to my perspective of the things: Heathen is catalogued as a technical thrash metal band, and the only "real" technical thrash band that I have listened to is Toxik; Toxik is a band with a very frenetic, fast as hell and complex performing style (proof of this is their opera prima "World Circus"), so when I first listened to Heathen, I was looking forward to hearing something similar, something that blew my mind due to the complexity of the music. Other bands as Megadeth and Artillery have made some technical stuff without being catalogued as such, so I thought "dang it! Heathen should be something really astonishing!". This background made the final product didn't fulfil my expectations in the end.

Talking about the riffs, they're NOT technical AT ALL; instead, they are mostly made out of tremolo picking and power chords with really few variations, which kind of disappointed me due that if everyone is labelling the band as technical thrash, there must be more effort in their riffs. The only riff that I considered sort of technical was the main riff from 'Worlds End'; it's the most "varied" riff of the album and made me think that this is the kind of riffs that should prevail more in the album (dang it, I repeated several times the word "riff").

Now, ignoring the genre label, is it a bad album? I'd like to say no, but the truth is that I didn't enjoy it as I wanted.

I felt the songs insipid and with no much grace. With no identity. Exchangeable between them. And it's sad because the most recognisable and enjoyable song is a cover. Yes, A COVER! The rest of the songs feel like a rip-off of "Bonded By Blood" or even "Kill'em All", but lighter. The repetitiveness of the drum rhythms and structures is notorious and make the album feel as devoid of strength and power. Also, the guitar distortion does not help very much, as it sounds more like a speed metal performance rather than thrash.

However, opposite to most of the albums that I have "destroyed", I found some good things on this album.

The voice is very good. David Godfrey's voice is different to most of the vocal styles that predominated back in those days in the thrash scene; Joey Belladona's and this were different in this aspect, which feels like a fresh air blow amid several aggressive and harsh vocals. Another good aspect are the solos. Altus and Piercy showed their shredding skills since their first release and is a strong point to the music. It's a delight to the ears listening to such talented guitar players.

To finish, I noticed something curious. 'Breaking The Silence' is another of the few enjoyable songs for me, but mainly due that it sounds like a kind of proto-power metal song thanks to the guitar melodies and the voice. I know, back in those days, the first "Keeper of the Seven Keys" was already released at that time, but power metal was not completely developed then, so this song feels like one of the first songs of the genre. Check it out and prove it for yourself.

To conclude, Breaking the Silence is a personal deception. It's infinitely inferior to its successor album as it feels powerless, repetitive and insipid. However, the reason why I don't give a worse rate to it is because it's a more speed metal-oriented album, and as I'm not very into this genre, I feel unable to destroy it completely. I recommend it to the fans of this genre; maybe you can find something memorable in it. Breaking the Silence is an album that I will possibly never listen to again; it's nothing special for me and I prefer listening to another kind of stuff (such as their later full-length release).

1987 is long ago. The year saw a military coup in Burundi, Ronald Reagan had reached retirement age but played President and Greta Thunberg was less than a vague thought in a hopefully not warmed up galaxy. Thrash / speed metal was still young, and Heathen’s debut presented an over-averagely melodic kind of this fascinating style. The album consisted of seven own compositions and a cover. So far, so good. But due to whatever reason, these dudes thought it would be a good idea to present their edition of Sweet’s “Set Me Free” and this choice showed that there was no clear line between the establishment and the band. This fact hurt my juvenile “thrashing outlaw pride” and, even worse, the number sucked. Thus, the nadir of Breaking the Silence is obvious, but what about the other side of the quality scale?

Heathen had a knack for cool riffs and the debut shows this feature impressively. A very good example kicks off “Open the Grave”, a song that unites all velocities of thrash metal after a mid-tempo beginning. It’s a dynamic headbanger with a nearly perfect mix of melodic and metallic elements, although its silent break with the dreamful guitar would not have been necessary. The voice of David Godfrey also finds the balance. His voice does not mirror brutality, but he cannot be blamed for a half-hearted performance as well. He does not fascinate with an overdose of charisma, but he gives all that he got and that’s what can be expected; everything else is a stroke of luck. Anyway, let’s get back to the music itself. (Not only) the A side of the vinyl is dominated by clearly defined, speedy guitars and up-tempo drumming. “Pray for Death” and “Goblin’s Blade” deliver very solid and robust lines, the guitar work reveals a certain affinity to early Metallica. “Death by Hanging” puts the two aforementioned songs in the shade due to its immediately memorable chorus and this means that the songs of the entire A side formed a strong unit.

The production offers a prototypical eighties sound. The guitar tone does not lack sharpness, the vocals are on a par with the instrumental performance and the overall picture of the sound is neither voluminous nor flat. However, the mix was and still is good enough to make songs like the title track to a very positive listening experience. (And I am speaking of a truly positive thing, not of a positive pregnancy test which is sometimes not that positive.) Its chorus glitters with a profound heaviness, the instrumental part surprises with strong melodies and all different sections go hand in hand. Yes, it might be that every metal track is a saviour after four minutes of torture called “Set Me Freeee-eeee” (this crappy chorus!), but we don’t need to discuss this here. The energetic “World’s End” combines rasping guitars with catchy sections once again and the closer crosses the finishing line without showing any signs of serious weaknesses. Heathen probably did not pen an ingenious work and presumably it is no coincidence that nobody picked out this album for a review in the last five and a half years. Nevertheless, it is still worth listening and I am sure that most friends of Forbidden, Testament or Vio-lence will share my point of view. Only the opinion of Reagan, Thunberg and the generals of Burundi is not known.