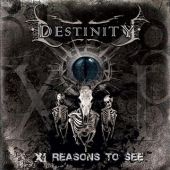 This album is much in the same style as "The Inside". Melodic Death Metal is displayed has a spark of intensity that carries it to another level. There are some short Classical Metal moments to be found near the beginning of the disc as seen with the opener as seen with 'Negative Eyes Control', but for the most part this is more of that combination of veracity and melody that was present on "The Inside". The formula still works well, despite being fairly straightforward and not the most original you’ll hear. There’s more to catch your attention and bring you in than most Melodic Death Metal, regardless. One can definitely detect a Thrash aspect to the material as well, though it’s not the most noticeable part of the bands music. It all comes together for something of an inferno of sounds.

Destinity has enough different elements uniting to form what is a strong cohesive unit overall. Though they are difficult to classify, they are able to connect the listener on many different levels to create a moving experience. My biggest fault with the band is probably the vocals which are a bit too guttural for my taste and the type of music they perform, though they’re acceptable. Regardless, the band certainly unite together strongly to display their unique blend of melody and power. Destinity show the ability to be catchy, but yet intelligent enough at the same time. However, one might wish they would be a bit more interesting as everything tends to sound very much the same. This is often a problem with a lot of Melodic Death Metal and a thing the band aren’t able to completely overcome.

There’s also the issue that the album doesn’t differentiate itself enough from "The Inside", though it is solidly performed, and this is certainly something to bring up. I have a feeling that people looking for a solid Death Metal in the vein of At The Gates won’t want to pass this one up.