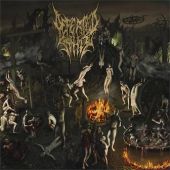 As much as I love Defeated Sanity’s abrupt tempo changes, I have to admit this album’s composition is way too segmented and so fast sometimes it loses focus even on the evil riffing on behalf of being brutal. Another aspect I dislike about this phonogram’s songwriting is that there isn’t enough repetition of the music themes so you can’t keep anything as a listener. These guys are mad scientist-mathematicians after all, it’s not rare that one of their investigations went a little too far. The key elements are still here, Chapters of Repugnance it’s not a bad album at all, Lille Gruber’s antipodal and eccentric approach to blast beats and syncopated drum fills is always a thrill, the same with Jacob Schmidt's fingered fretless bass attack and gifted soloing. The album was recorded in 2010 so you can expect digital era crystal-clear and polished production with a balanced and technically perfect mix but; subjectively, it has such an enhanced low end and surround feel that at the end it saturates the already downtuned riffing and makes it sound opaque.

Another aspected I missed about their previous album, Psalms of the Moribund, were the few but still prominent quiet parts with jazz influences because they set sudden mood changes that were unimaginable in a brutal death metal context. It hurts the variety in textures of the rhythm section of the band which is their best feature, Chapters is more relentless and brutal but that’s its main flaw, it never breathes. Monochromatic at its best, it resembles the generic tunes of their first record with a technical twist and a production upgrade but mutilates the band’s world class inventiveness while restraining them to mindless violence. If you are into brutal death metal there are still great chances you might like this but they can do much better, especially when they write without any compromise… For this record they tried too hard to blink towards the american market perhaps.

The guitar work is technical because the riffs sound super hard to play but there aren’t many leads or sweep picking licks where you can hear the higher range of the instrument besides the pinch harmonics. This is the first time they opted for an american vocalist to fill on the growls, I don’t know if being a native speaker or the diction adds something to the gutturals but man, he did a fantastic job on these recordings and sounds low, deep and completely inhuman. Slow slamming breakdowns are the only texture change we are getting apart from the gravity rolls or frantic blasts, ultra heavy and well coined but bidimensional. That being said, there’s no reason to actually loathe this record I mean, wash your mouth or at least learn how to play before you talk shit about Defeated Sanity, hehe. The album is certainly flawed but it is still better than old Dying Fetus, old Deeds of Flesh, Liturgy, Cinerary and many others.