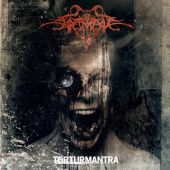 Once again, Norway has assaulted our collective senses with a darkened metallic masterpiece of epic proportions. Unexploded Records have released onto the world a fiendish force that is called, Gravdal (taken from a name of a town in Norway) to bring their brand of blackened brutality to steamroll the weak, the foolish and the fearful with.

This massive four piece unit (along with a couple of guests) power through some of the most dominant and soul blackened Black Metal I have had the pleasure of hearing. With guttural vocals unleashing havoc overtop of a wall of evil guitars and earth shaking bass lines, this sets the stage for a infernal wall of sound that is the complete package for a Black Metal act.

Bright spots are many throughout the album, as the band shows a maturity that is also powered by the massive need for pure heaviness. Most notable tracks are the pulsing heaviness of 'Slave' to the near hell spawned ballad of 'Mishandlet'. Each of these end up showing that malevolence has a soundtrack.

Norway is the place for hell-music and Gravdal are one of those satanic soldiers that will lead the charge. I am now one of their darkened minions. I hold the horns up proudly. Get the album, and see for yourself.