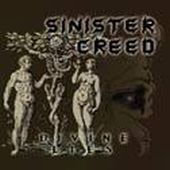 If pain, degeneracy and viciousness had a soundtrack all of its own... I really think that I have found the band that have brought all of this to life in music. With unrelenting harshness and a near lethal sonic attack that goes beyond the normal of most Death Metal, Colorado based Sinister Creed has seemed to tap into that certain place of the human spirit that makes such wickedness possible.

With a razor sharp edge to their guitars blaring a path out of the speakers, Sinister Creed’s "Divine Lies" begin its blood soaked job. Assaulting your very senses with a battery of spasm inducing beats and pounding bass riffs that rumble forth, the band shows off the complex power of Death Metal played at its ultimate best. Strong, vicious lyrics and almost addictive leads seem to shred your very mind.

Songs like the face peeling attack of ‘Temporary Insanity’ to the seven megaton blast of the album’s title track, Sinister Creed has put out a work of pure blood soaked art that leaves you wanting to hear more and more. Aggressiveness has a way of getting its point across, with a point blank approach... and this album does.

Straight forward and very heavy music is what the band gives. If you don’t want that, and need something along the lines of EMO shit, go else where. This is powerful metal for the truest of metallers. The squeamish should not listen to this album for they are at risk of having their brains liquified, and having their bowels explode.