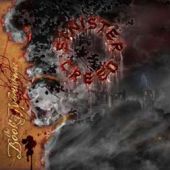 Exploding from an extended self imposed sort of exile, Sinister Creed has brought forth their next offering of sheer and very uncompromising metal mayhem. Can they top the amazingly brutal 2000 release "Divine Lies" and show that the hiatus they have been on for so long has made them stronger?.

Sinister Creed is known for being a band that delivers extremely aggressive Death Metal with an edge of madness to it... and the band has not let us down after so many years. With brutal honesty and years of crafting their brand of sonic destruction, Sinister Creed appears and pounds out some of the most impressive yet fully straightforward metal that has been put out there in a long time.

Since their last release almost ten years past, they have perfected their Death Metal attack, forging some of the tightest and brain bursting metal that has ever been penned. The added plus is that "The book Of Noctubane" is a concept album that is showcasing songs made up of pure pain and torturous villainy that have such musical strength that goes well with the intelligence and creativeness they have. The do deliver what is lacking in the metallic world of today.

The Creed boys have done it again, but now it is bigger and better. Guess that nine year stretched layoff between albums have really paid off for the boys. I think that is exactly the case here, but I gotta really admit that not too many bands can pull that off.