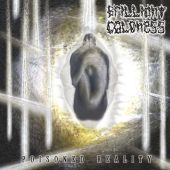 Brutal Death Metal from Ukraine! Brilliant Coldness’ second release "Poisoned Reality" is everything a death junkie could want and then some. "Poisoned Reality" opens with one of the most interestingly mundane samples of the urban sound-scape. The fact that this is the starting point for the album makes sense; dealing with the annoying cacophony of other people you hate certainly puts one in the mood for Death Metal of the most brutal sort.

Their sound can be defined as bass-heavy as in you can really hear the bass. They even allow the guy a solo! Sputtering vocals with a peanut-butter texture unique to Eastern Europe add a particular charm. Brilliant Coldness’ overall sound could be described as heavy with an old-school feel as they avoid any Black Metal influence as far as effects and recording quality. What makes this album stand out is again the odd sample choices, the introduction to ‘Paradox Of Madness’ is a particular favorite in it’s appropriateness.

The album overall is well done, solid, and enjoyable. It’s unfortunate for this band (like so many others) Photoshop was the artistic tool of choice for the cover design. I mean, I would not have looked twice at this album based on that, which is shallow I know, but really, there’s a lot more going on here and shouldn’t the visual presentation justify the music inside? This doesn’t affect the rating for "Poisoned Reality", it just bugs me. Get out your pens and ink people! Even horribly drawn covers have more charm than the digital stuff!

Anyways, this is good stuff. If you like your Death Metal with a little old-school, make sure to put Brilliant Coldness on your metal shopping list!

The Ukraine is known for many things that are both good and bad, one of the good is the proliferation of very extreme forms of metal. Coming out of this growing yet somewhat misunderstood scene, Brilliant Coldness seems to be of the more talked about heavy bands that is from the former Soviet Union satellite province... and who are shining stars in the making. Fascinated, I dived in.

Combining some seriously heavy Technical Death Metal with this strange underlying Grindcore aspects in the music, Brilliant Coldness seemed to be one of the heaviest things I have encountered. With the thunderous speeding style of drums, acid laced slashing guitars and gravel vocals that seem to be from the darkest realms of never-ending pain and total destruction... this band never fucks around when it comes to playing. With such devastating power, it seems that only the strong will survive the metallic onslaught.

Now, I am not a Grindcore fan, but hearing just how the Grind is incorporated into the Death Metal so effortlessly... it brought the music alive. Add in the fact there are many cases of great lyrics not to mention that this is also a killer recording to accent some staggering musicianship as well - Brilliant Coldness has a guaranteed metallic monster on their hands, and they are not afraid to use it.

Gotta really repeat myself in a different way... this more than just a great album- dare do I say so early into a new year that this might be the Death Metal album of the year? Yep, it is that fucking good.