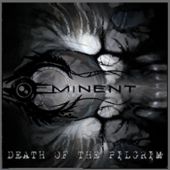 Over the years, the city of Los Angeles has been the no-brainer Mecca of Heavy Metal. That, I am so thankful to say, is still the truth even in the new millennium. Clawing its way out of the clubs and shit little venues, comes the Power Metal outfit Eminent - a band with talent and an agenda for Heavy Metal dominance.

With the first track blaring out of the speakers (song is called 'Pilgrimage') it was clear that this band was something out-of-the-norm. Sounding like a cross between In Flames, Blind Guardian, Satavage with Symphony X tenancies that combine with an odd likeness to the German metallists Helloween and some kinship to the whole NWOBHM movement in the 80's- they melt this all together and add in pure angst driven originality.... An this is the first track that is playing, let me remind you.

The next ten tracks attack, and only solidify how great of a band Eminent is. Vocally so strong, lead singer Boronic reminds me very closely to having Bruce Dickinson meeting the singer from Dream Theatre... Soaring power meeting full out strength. The others that make up the band (Hovak and Andrew on guitars, Lonny on drums and Vahe on bass) motivate the whole band to be the very best they can be... and as a whole become a band that is indisputably awe-inspiring on a major scale.

It seems that Eminent has creates pure and unabashed metal that sticks in your head unlike 99% of the other metal that happens to be out there today. I find that I cannot stop listening to this album over and over again... and that is amazing considering I just might have the worst case of ADHD ever (a trait of my dear ol’ Daddy).

This album is that freakin’ good, it reaffirms to me that metal is so good... oh so damned good to say the least. If this album was a voluptuous woman, I’d be sporting the granddaddy of all woodies that would not quit. Now that is what you call a good album... huh?