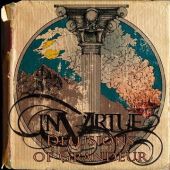 US Power Metal with the purity of some strong and clean female vocals, with strong backing vocals that are growled out like a caged animal, with musicians that know what the hell they are doing.... and all for world domination?? Yep, In Virtue has gotten my attention, and almost as if they have grabbed my short hairs.

Taking lessons from Power Metal gods like Overkill, old Metallica and others of that ilk, while never settling to one pigeon-hole or another - In Virtue seemed to have mould it all into their own, add the clean/growl vocals of the amazing Ms C and the vocally-vicious Trey Xavier that seemed to really accent every heavy and raw guitar stroke and drum blast that the rest of the band can give.

Songs such as the incredible 'Paralyzed' show a band on the very brink of being one of those band that will stand above the rest, then 'Foresworn'rumbles out of the speakers and sets that statement in stone. Great songs, great writing and amazing musicians... yep, they got it all. The only downer is that the recording could have been better... but that is minuscule in comparison to the talents that In Virtue has.

I really hope to hear the next step in this band development - because this is exactly why I have been a musician/writer and metal head for so long. I have a virtue, and it is In Virtue! I will press play again and adjust the volume to the max...Ahhhh!! metallic heaven in the making.