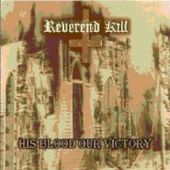 Mixing Thrash inspirations with vicious Death and Black overtones that have complete old school metal sensibilities... Reverend Kill is trying to be that sort of a band here.... and apparently they are more than just simply succeeding. Being that this is the bands first release, made me even more impressed.

What you get from this amazing Canadian band is pure and unadulterated Extreme Metal at its apex. Powered by strong vocals, guitar lines that seem to explode out at you and a rhythm section that can set off earthquakes around the globe...Reverend Kill makes it clear that they don’t fuck around with anything even close to being lame music. They give you the sonic equivalence of an atomic bomb.

Highlights on this release are numerous through out the nine that they offer, but I guess I have to say my personal favourite song on the album has to be ‘Trapped In Amber’. This was the one song in particular that truly had knocked me right off of my seat the first time I heard it, and kept doing it throughout the four minutes and fifteen seconds of it. It was crushingly loud, heavy as a black star and oozed with self-confidence.

It is so damned good to hear a band that had chops and some talent like Reverend Kill have truly shown, and it is equally as good that they knew how to use them wisely. I am impressed and really wanting to hear more from them very soon... Hint, hint Reverend Kill.