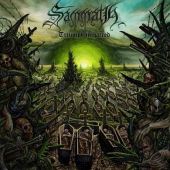 With fury and fire that end up combining with the infinite powers of hell... come a wall of musical explosion that has only one name for it, a band that has come from Holland to kick your ass. Sammath.

Combining the fury of the late 80's Thrash in with some serious Speed Metal guitars and a huge addition of dark and heavy Black Metal as well... Sammath has orchestrated a style that is powerful, yet has this odd resonance of melody through out every eruption of music. Started in 1984 by Jan Kruitwagen, the man cut his teeth in Australia on the more extremes of metal... now residing in Holland, he has brought his own vision of extreme metal to the world after many albums and EPs.

Sammath are some of the fastest metal bands out there, but not even one time do they rely on that simple fact alone. With darkened lyrics that are very well written, not to mention they are people that can actually play... this band brings it all together into one entity, thrashing and bashing its way to be right now one of the unknown leading forces in the world of total extreme metal.

Some might really hate the bombastic approach the band takes to deliver what they do... but that is all right... metalheads will come around when talent is there. Sammath is on a mission to make itself known to the throngs of eager metalheads all over the world... and by Hades, this album has the ability to do just that and a whole lot more.