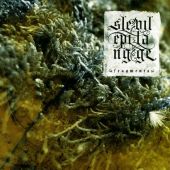 From the crescendo, dripping with reverb and atmosphere; Sleeping Village cement the notion they are a fine addition to the new wave of Experimental Black Metal. That wonderful new sub-subgenre firing with embers of creation and painfully steep cliffs for them to hurl off into the dark night. The more distorted and traditionally black segments more akin to waves slamming against rocks. The warmth is mild, but perfect in keeping with their attack that lends itself more to post punk lingering than blistering attack. Sure, blasts abound, but the melodies seem half timed and droning so the overall feel is more low and soothing. Broken up by wonderful wedges of semi acoustic almost folk and flooded vistas of samples and experimental synth-wrenching.

The guitars are cold, smooth and fluid - so much without the bass filling out the lower frequencies there might be nothing of a discernable melody when the pace does pick up. The vocals fall under the same mix with a palette of non distinct belching (third rate Esoteric??). When the more avant touches are applied (see track 'Out Of The Way'), the soundscape does seem to be a bit confined and too drawn out. Like exploring a hallway rather than the physical representation of emotion or ideal. Let that not be a distraction though as it seems they combed every inch of that hallway thoroughly with textures to spare - it just might be a bit unnecessarily long and out of place. There are keyboard treatments, but think not of rehash symphonic crap - they actually took the time to see where the sounds would fit the best and do more for the composition rather than just "be there". For those fans of Negura Bunget, Wolves In The Throne Room, Alcest, and Xasthur - this would be a welcome addition to any late night.

The sort of production displayed here is as top form as any in this genre. This isnt the sort of thing you would want to have the production of say a new Dark Tranquility album. In fact the over all vibe is more of a one up on Emperor's "In The Nightside Eclipse" during it's more scathing moments but with an even clearer and more distinct presence (keys and the seperation of bass, guitar, and drums) and nicer cleans by far.

Artwork compliments of Diramazioni Studio - wonderful stills and zooms of nature's vibrant green. Dare it be said - a package of 'organic' and 'earthy' motifs well composed. The contrast being rocky close ups and a very scratchy rendering for the inside case itself. This entire EP is well represented and definitely shows the sparks of a project on the way to greater fields of exploration.