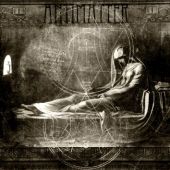 I’m still on the fence as to what exactly this ‘post-black metal’ trend is, but I have a feeling it’s sort of a moodier, properly-diluted form of blackened art mixed harmoniously with some gothic overtones and depressive metal. If that’s the overall gist then I’ve got Poland’s Mord’A’Stigmata down to a narrowed pathway.

Okay, when I think of black metal in the 21st century I immediately get the picture of the jokes that have become Dimmu Borgir and Cradle Of Filth, but from the mire of selling out and pure thievery comes the occasional ‘dark’ spot that’s wholly credible and worth following. Mord’A’Stigmata does just that with its sophomore piece, Antimatter. An often sadistic venture into hells unknown, the album refuses to base itself solely in one realm of predictable black metal. In forcing the issue of diversity in one style, this album offers credulity so often reduced to random vapidity and shtick that it’s hard to recall the glory days of blackened metal music without rolling one’s eyes. While the torch is certainly on a low and borrowed flame, bands like this come around and disrupt the calming tides with music that lies somewhere between sheer brilliance and an established legend’s playbook. That said, what Mord’A’Stigmata accomplishes is nothing short of a complete picture into what should be modern black metal (or post black if you’re so inclined to find new labels).

Vocally the style rests in brief, veiled glimpses of Atilla Cshiar in the less ‘gruff’ areas, but other than that it’s very ‘typically’ black metal, sans the familiar over-the-top shrieking. In fact, this is one of the more accessible styles I’ve heard and I quite like it. Maybe, just maybe Behemoth might have to give away the Eastern European mantle since they’ve become a little too predictable these days; if that’s the case, a band like Mord’A’Stigmata is certainly deserving of such a chance. The tracks on Antimatter read like a how-to for this black metal art form that seems to rely less on the hateful volatility of its predecessors and more on the sorrowed enhancing of atmosphere and self-dwelling. In this facet, the album is a true must-hear for this reason alone. There are far too many bands labeled ‘post’ now; it’s beginning to sound like metal cereal, the Breakfast of Sapiens. All funnies aside, this record encompasses all that is vacant in today’s run of black sounding bands. “Metatron and the Waters” is something that could easily have been Dissection-related in between Storm of the Light’s Bane and Reinkaos, but it’s all Mord’A’Stigmata and delightfully so.

True black metal fans might dig this for its aesthetic charms, but even as I go through it a second time the vocals are really a highlight for me. There is a sincere dim essence afforded the listener who is able to attune to such a high point of his or her psyche. Without sounding too melodramatic, the music on here can certainly be enjoyed much more at a higher level of consciousness; in layman’s terms, if you’re a mall-metal fan with only Dimmu Borgir, Cradle or Eyes of Noctum on the brain you’ll find this album “too chaotic” or “all over the place, confusing”, both terms I’ve heard used for some epic black bands who still get it.

Sun & Moon might have a good jump start on some killer bands with releases like this. I look forward to delving deeper into the labyrinth and meandering around for a while. This is just the score to compliment that journey.