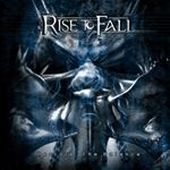 It has been said that there is such a fine line between creating some truly incredible music and playing pure shit while dressing it up to look good... that the secret is in how you use talent wisely. In quoting that little pearl of wisdom (author is unknown), I go on to review a Spanish band called Rise To Fall.

This foursome from Spain plays a sort of twist on a newer sort of breed Death Metal mixed with some shading of Nu-Metal subtle tendencies... all of which makes it as frantic as it is heavy. It does sounds like a good combination on the surface... but looks are sometimes very deceiving and leads you to expect more! What I got was almost a cheap attempt at metallic extremisms at its lackluster best.... good production can always hide that awful truths, but that is not the point here.

The album itself sounds damned good, but it really does hide the fact that Rise To Fall is pretty much an average sort of band with incredible recording values. Lyrically it is cliched while musically it comes across as predictable... the meat of the music is simply bland and offers up nothing but boredom. Sounding so good can help, but it does not fool the true metal fan for long. There is this amazing potential for showing talent that is hidden in the mediocrity, scads of it... but the oh-hum factor of the album nearly obscures it.

A little tweaking in the music itself and less time in production would help the band garner what it is working towards. As of now though, averageness makes it hard to get excited over the band and your left with wondering if you have listened to an album.