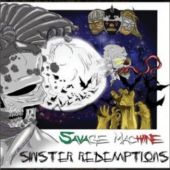 Ever once in a while, you come across a album that is so ridiculously stupid and over the top sort of bad, it seems almost surreal. Savage Machiine Mexican Metal from Oakland CA is just that type of band... Pure cheese, and not the good kind of cheese either... weeks old Limburger left in desert sun would be more appealing.

Sloppily played, hideously written and having this total lack of any real originality to the whole thing. This is perhaps one band that seriously needs to be told never to play or record a single song ever again. Savage Machiine say they are Death Metal (Lucha Metal as well) as well as a theatrical based act. Personally, I don’t hear the Death Metal thing... Seems to me more like it is just some very lackadaisical garage punk that is trying to be metal, and just lacks the simple talent to make it average metal.

The production on this album is amazing, but how good it is inevitably spotlights just how bad they are... and how bad they might end up being later. Uninspired and clearly not very good, this band just seems to be trying to make a horrible noise rather than putting out some good music. I usually get into some great Latin styled metal when I find it... but this makes me think that there is way too much cheap and badly made tequila floating around out there.

I for one, don’t like this album. I know many will love this album, and give me grief for hating it like I do... but screw it all. I say the truth, in my own opinion... and this really is badly played Pseudo- Metal. Don’t get me wrong here...I like Punk inspired stuff like many do... but come on... you need some talent. Savage Machiine just does not have any.