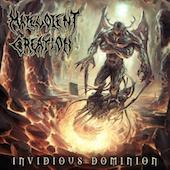 To refer to original logic, when death metal is properly played, the net result is a successful release. It shouldn't be way too long, nor should it be way short. What we have here with this Malevolent Creation CD is an album that is way too short. It's difficult that out of the 11 tracks, it's hard to fully make out the guitar riffs because of the chronic blast beating. The intensity is there, but these guys needed to concoct a release that isn't too vocal stricken and less guitar oriented.

Definitely fast tremolo picking occurs here, but not enough music to accompany the totality in riffing. This album isn't boring, just the vocals are non-changing throughout the entire release. Truly defiant and a slaughterhouse of energy, but the music isn't entirely intriguing. There was really nothing special about it-nothing that hasn't been performed already from a Malevolent Creation release.

These guys I suppose tried to keep things short and the main emphasis was on the lyrics/vocals and not enough on the music. Just blast beating galore without anything that's too catchy riff-wise. What we have here is a conglomeration of fast picked guitars, but nothing that really sticks to you. Plus, the lead guitar pieces didn't strike me with anything that's fancy or well played out.

What we hear most of the time is Bret Hoffman's vocal outputs with nonsensical lyrics and hoarse throat throughout this entire release. The vocals go well with the death metal guitar riffs, though I would've preferred more riff outputs without so much of the vocals. What would've been classic is if the guitar riffs would've been catchier and songs that would stick into your brain because of their innovation. I didn't find that on this release.

Bret's lyrics focuses mostly about death, war, hatred and violence. Definitely brutal topics that mesh well with a death metal-oriented act, but it doesn't take a whole lot of effort for these lyrics to come up with. But it is what it is and nothing more here. All 35+ minutes about this release aren’t a total waste. However, I think that the band could've come up with something more interesting musically. The songs on here didn't catch me as being too innovative.

Enough with the criticism though. The band hasn't changed its style which is a plus. The album itself just needed more length-I can't stress that enough. They also needed to concoct guitar riffs/leads that were more interesting and outstanding. They're just not there with this album. I think that the album needed more time to construct. Again, it's not boring, but if you want to hear Malevolent Creation's classic releases, best to delve into the past and you'll find that.