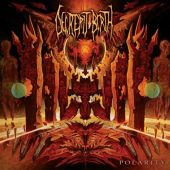 Decrepit Birth are quite an exceptional band. In a genre over populated with mediocre mush, these guys not only stand out, but can now be considered as pioneers at their game. While their debut, And Time Begins, was a lesson in speed and brutality, their sophomore release Diminishing Between Worlds, the band carried themselves to a completely new level. That album set the bar so high on so many levels that many wondered how they would follow up on it. And now, it’s finally here, Polarity, in all its shredding glory.

So, how did they manage? Well, that basically comes down to what you were expecting. I don’t think that anyone out there is expecting Decrepit Birth to go back to their And Time Begins days anymore – there is simply no reason to do so. So, what we have is basically a continuation of Diminishing Between Worlds. Intense, creative riffs, mind boggling guitar solos, excellent drumming, outstanding musicianship.

Though I hate to say it, but if compared to Diminishing Between Worlds, this album is somewhat of a letdown. Not to say that the band doesn’t play their hearts out, it’s just more of a thing to do with arranging. For some reason, the album feels like it’s been rushed, though I can’t imagine why. So many great ideas, yet this time around, they haven’t been as masterfully blended as they were previously. The drumming, while played flawlessly, is not very creative, and at times can get repetitive. When I say repetitive however, I don’t mean it in the Disavowed sense of the word – it’s not just constant blast beats all over the place. It’s just somewhat of a step down from Diminishing Between Worlds.

Most of the guitar riffs are downright immense. Creative, jaw dropping riffing going on throughout most of the album. "Metatron" is a great example of Matt’s intense guitar playing (the break at 0:26 is fucking awesome) and so is "Sea of Memories". Total bombardment of riffs and leads, all arranged perfectly and coherently. "Resonance" sees the band showing its Death influences loud and proud, and it’s one of the most notable tracks on the album. A video for it was also filmed, which also turned out quite well.

Despite the inconsistencies on the album in regard to the arranging and the general flow of the songs, three tracks on here will absolutely blow your mind and make you forget about pretty much everything else. "Symbiosis" is the band in its finest shape and form, with what seems like millions of riffs and leads just execution to such a degree of perfection it’s frightening. The solo section in this track (1:59) is simply mind blowing. The progressions are superb, the dynamics are second to none, and the overall feel and execution is done so well that I can do nothing but nod my head in respect and admiration.

"A Brief Odyssey in Time", despite being short, is one of the most important songs on the album. Did anyone else get reminded of The Terminator at 0:24? That synth bass just kills it. Totally unexpected and sounds downright badass.

And of course, the first track, ("A Departure of the Sun) Ignite the Tesla Coil". As soon as the intro kicks in you know you’re in for a trip. Matt lets his creativity loose with an impeccable classical intro, before the band unleashes all hell with a sledge hammer of riffs and drum fills. Clocking it at over six minutes, this song pretty much has it all. Intense riffs, intense drums... intense fucking everything.

The production on the album is nicely done. Everything can be heard loud and clear, which is simply essential to a band like Decrepit Birth. The bass drums, however, sound way too clicky for my likings, and the vocals are kind of buried in the wall of sound.

Speaking of vocals, I don’t know why some people are complaining about them. Bill does a fine job throughout, and he always has. Sure, he may not be the best out there, but no one ever said that he was or had to be. He does the job well, his voice fits the music, and his phrasing is spot on almost all the time. What’s the problem? And I thought I was picky, fucking hell...

While this album is a step in the right direction, overall, it’s just not focused enough. However, there is still more than a good dose of extremely awesome metal moments, so it’s not to be missed.

The U.S.A. is tightening that frayed noose around the neck of all things death metal. Out to reclaim our due throne, Decrepit Birth unleashes a monster of furious death metal in Polarity. This is eleven tracks of unadulterated brutality with such a fine point it’s almost too good to be real. Have I become that jaded and disillusioned?

With lead vocalist Bill Robinson and guitarist/vocalist Matt Sotelo the only two members that haven’t been through the revolving door of past members, the final product of Polarity is one of not only immense musical diligence but also of intense technical death metal. To overstate this is to risk repetitiveness; to understate it is criminal because in an endless river of crap bent on the typical death metal sound yet always falling short, these guys from California know their drills.

Coming off the equally impressive Diminishing Between Worlds just two years ago the band refreshes our memories by designing a virtual musical canvas of brutal efficiency fit for any fan of the all-too formulaic genre we love. Stagnancy and a derivative element are always par for the course with this movement, sure, but providing a true illumination above and beyond the predetermined scope is always a welcome surprise. “Mirroring Dimensions”, for example, changes its tempo so easily and so often that you can’t help but pay attention to the music herein. When you think you might hear Vital Remains you can just as quickly spot a Hate Eternal or a Vader riff that makes you start wrecking the room. Just the other day I bought a CD from another band that had the drums so sharp and high in the mix it sounded like a ticking time bomb in my car with each double bass blast, so when I hear some real production values attached to an already great album it warms my cold innards. The mix on this is really nice, always a plus.

Standouts are “Darkness Embrace”, “The Resonance”, and “Mirroring Dimensions”. I certainly enjoy the cerebral challenges of a good metal band, sadly so few and far between these days, but when you’re challenged on both a mental and emotional level to either pay attention or miss something memorable it marks the grand book with yet another solid band that offers more in the way of good music and less in a boring image or casual repetition. Polarity wins the coveted pay attention or turn in your metal card award for the week.