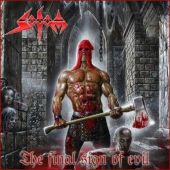 Where is the button we have to press in order to get back into the past? And is it only a question of time? Definitely not. It is also a matter of recreating the same personal circumstances, the same mentality, the same surrounding. In terms of a metal band, we should not forget that it also needs the same level of musicianship and at least comparable technical possibilities. In short: it is simply impossible to regain the original spirit of the early or mid-eighties.

Sodom try their best to find a way to the atmosphere of their beginning. But the recording sessions were pure hell due to Chris Witchhunter's serious illness. An alcoholic on drums is no good idea when it comes to record a more or less professional album. Cynics might say that the involvement of Witchhunter (R.I.P.) ensured the awkward momentum on The Final Sign of Evil Tom Angelripper was striving for. But this is a very contemptuous interpretation and I do not share this point of view. Anyway, the drumming remains very simple - but the same applies for anything else. The song collection suffers from a lack of dynamic. Both the song structures and the guitar leads reveal the great room for improvement that Sodom still had to fill at the very early stage of their career. Outbreak of Evil never scored with compositional sophistication. It made an impact, because it was a sheer explosion in 1984, but another format of the well-known track 23 years later cannot have the same effect. Thousands of other extreme metal bands have published their form of musical violence and therefore the original version remains unique only because of our nostalgic memories. This is exactly the crucial difference between the two versions: the recycled edition is not combined with any events or moments of our youth. Thus, it is not unique and so only a more or less good, yet interchangeable track remains.

Let's leave every type of nostalgia where it is and concentrate on the songs. It becomes obvious that the decision of SPV / Devil's Game in 1985 to publish only an EP was a good one. This dozen of decent yet somehow flat tracks is a little bit boring over the full distance. Of course, the first regular full-length Obsessed by Cruelty did not lack excitement, but it offered a couple of pretty complex configurations ("After the Deluge", for instance) which are missing here. I do not say that the compositions sound half-baked or ill-defined, but no song leaves a long-lasting impression. The material passes by without remarkable ups and downs. Tom's nagging is always welcome, and the archaic black / thrash approach has a certain charm, nevertheless: either one releases such songs at the time of their creation or never. The album lacks charisma, spirit and authentic vibrations. Additionally, the "new" songs, those which did not find its place on In the Sign of Evil, are rather weaker than stronger in comparison with the five classics. I don't say that they are typical outtakes, but back in the mid-eighties, the juvenile group was well advised to write and use other tracks for their following vinyl’s. The different parts of the songs do not always form a strong unit and therefore some of the unpolished compositions remain a patchwork ("Where Angels Die", "Ashes to Ashes"). On the other hand, "Hatred of the Gods" or "Defloration" score with some fine riffs and speedy parts. So, don't worry, you do not need to fear any damage when giving the album a try. But it is a relatively tough job to accompany Tom, Chris and Grave Violator on their journey through time.

Of course, technical gimmicks and an overly powerful sound would not have match the intention of the band. Grave Violator is not the pseudonym of the world's greatest guitar wizard and the mix is neither inferior nor really competitive. Not to mention the difficulties with Witchhunter and his mediocre performance. Anyhow, if you like to listen to a great portion of Teutonic rumbling: Angelripper is your supplier - even though he also did not find the button to turn back time.