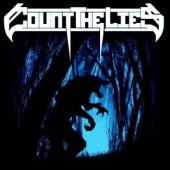 St. Louis MO is not a place I have heard much metal coming out of, hearing mostly deep and soulful blues come out from there... that was why I found myself so shocked yet intently curious when the band Count The Lies came to me. The have succeeded in making a sizable impact, I have to admit.

The band is clearly heavily influenced by so many of the early Thrash and Power Metal movement from the past, Count The Lies seemed to have really soak in what they were hearing and using e very last piece of it. Drawing their creative energies from bands like Metallica, Megadeth and Exodus and even a little like Trivium in a few places... the young band seemed to have soaked up the power and passion, and thrown it back out with as much explosiveness as those other bands had done in their heyday. With strong but fun lyrics that seem to be well thought out as well as being a band that can play pretty well... Count The Lies seem destined to climb to the top of the metal ladder very soon indeed.

The only drawback is that CTL have is that they are a little bit on the ‘green’ side of things... simply meaning that they have not matured as artists at the moment. Count The Lies are a little shaky with the way they have put together all of their material as they seem to struggle with the normal problem of having originality - but it does not hamper the fact that this young band is so talented. I hear through it all, that they will.

To make it all very clear... when the band matures and find their own originality while keeping true to what has inspired them... they will be a monstrous force to be reckoned with on the world metal stage. They have the sort of potential to be bigger than Metallica if they continue to grow into that possibility. I for one, await to see what this young band can end up really delivering, and will be there with horns held high and proud.