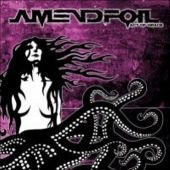 It is getting harder and harder in the world for anyone to be blown away by something or someone. For me, it is getting three fold harder than that... that was until a little known Finish band called Amendfoil came for my perusal. Bang!!! I fell of my chair the second that the CD started.

Reminding me of a very odd convergence of Cradle Of Filth with Dream Theatre, with some King Diamond that then mixes with almost an Avenge Sevenfold/Children Of Bodom meets Thrash combination. Don’t know how they have come up with this odd collection of varying sounds and genres to make up their music...but they have successfully combined it all so that it works with momentous effectiveness.

Amendfoil can play, they can write pretty good lyrics, they can blast with the best out there. Damn, these guys are a band that needs to be heard. One listen to such amazing grouping of songs like the maniacal 'Lotus' or the flamethrower guitar attack of 'Ire'... it is so clear at how good this young band is. They seem to have it all, and are willing to share their powerhouse
talent to the masses.

Don’t take my word for how good this band already is, get the damn CD and listen to it. I guarantee that you will know the future of world Metal. It is in the hands of a young band by the name of Amendfoil and they will get better still.