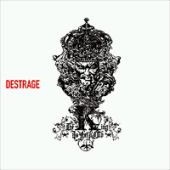 This album is hard to pin down because it varies the styles played so frequently. At times, there are moments that are almost euphoric musically, but at others it almost dissolves into generic Metalcore. More often than not, the good overshadows the bad here, however Destrage craft an interesting experience. The songs 'Twice The Price' and 'Jade’s Place' are highlights because they are compelling in their structure.

Destrage illustrate genre-blending relatively effectively and the nuances found within the songs elevate them above what you might typically expect from Metalcore. The outfit is truly more ingenious when constantly varying their style than going for all out aggression. There are occasions where Destrage may appear juvenile sounding, but these are overshadowed by the times when they make themselves out to be an intelligent act. Unlike a lot of Metalcore, there is always a tempo shift or instrumentation change that prevents Destrage from becoming generic. Similarly, the songs are better when they concentrate more on the instrumentation than the vocals. The clean vocals at times aren’t appealing and remind of mainstream acts, but the solid instrumental work wins out on the whole for me. Drumming and guitar showcases are impressive and steal the show overall. Furthermore, there are catchy subdued moments at times that bring in elements like acoustic guitar.

Destrage are a very good act, but have even more room to improve in the future, without a doubt. This isn’t a typical metal release, so it comes recommended to fans of bands like Protest The Hero for example. The aspects of the disc that are inventive outweigh those that are annoying on the long run. There will probably be a specific audience that appreciates the most and many others that will ignore it completely, but that’s what you’ll get with a style that is so different.