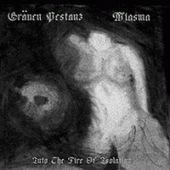 "Into The Fire Of Isolation" is the aptly named split between Ambient/Industrial/BM project Grauen Pestanz and minimal BM group Miasma. The split is organized differently from most, the tracks go back and forth between the two acts, which really makes a difference in how one experiences the split in its entirety. Some might find this back and forth thing annoying as they are two different worlds in action, at the same time a new story might be woven from their relationship that would not have taken place before. As different at the two are though, both bands are attached to the same umbilical cord for emotional inspiration, making this split a very appropriate combination.

Miasma’s ‘Inceptum Quod Visum’ is a layered collage of occult mutterings popping in and out of audible focus that eventually leads to mid-paced bm riffs trudging through mud. Its nothing you haven’t heard before, but its still good. The track changes and you find yourself in the equally bleak and dim reality of Grauen Pestanz, but something is happening. Truly guttural moans backed by barely audible chugging and there are whispers that echo against a wet surface beneath the earth, utterances in the sewer?

The cover art is appropriately hand-drawn, minimal in subject and monochromatic, exactly what one would expect. Props go for the non-digital DIY approach on behalf of the man behind Grauen Pestanz, the only problem is among the billion other BM-esque covers I never would have noticed this album. A hint of color is encouraged, not a whole rainbow, just a bit of one, that would have made all the difference.

Both sides keep their sound consistent in each track; Grauen Pestanz keeps the guttural ululations and chants, an almost industrial sound but not purely. The exception is the final track ‘Formless Reflection’ in which he reverts to strictly BM. Miasma keeps the consistent raw bm sound, all of which is good listening, but would’ve been found more interesting ten years ago if not further back. All in all lovers of mid-paced raw bm and/or atmospheric ritual sound will enjoy "Into The Fire Of Isolation". While at first I found it a bit on the boring side this split has grown on me and deserves at least one turn in your CD player or sound system before being put down.