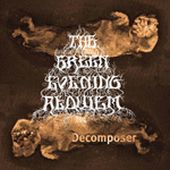 As a musician, I love it when musicians have the capability of literally blow me away while still rocking hard... I always am looking for that one single band that can do both with equal impressiveness and holds amazing versatility and originality. The Green Evening Requiem is vying for that distinction, so we shall see.

TGER is a band that really does show you something with substance, which is sometime missing in music today. With sweeping riffs that are atomic induced heaviness that is set within the majesticness of complex arrangements that straddle many musical genres... they truly do straddle that fine line between the Nu-Metal standard of raw savagery while having this aggressive restraint and melody of Prog Metal and still hint at some Hardcore leanings as well. The band really does find their niche between all of this, and really starts to come into their own.

Tracks like the insane bombasticness of 'Black Notion' to the brutally harsh riffing and insane vocal screams of the title track 'Decomposer'. The band shows off this mix of brutality and originality with great zeal and intensity that few out there can say they have. The tinniness that the production of the album has steals a bit of the punch through out the disk, but thankfully does not end up killing it in the end.

This is a perfect blending of different parts of the Metal pie... and they serve it up so damned well. They may not be at the top of the heap right now musically, but they have more than enough talent to take that spot in the not-so-distant future.