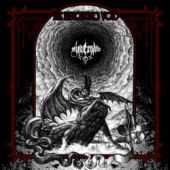 I remember hearing these guys awhile back on their "Ashen Banners" CD. That album was a very impressive sonic explosion, but I saw there was serious room to grow for the band- despite how amazing the album was already. Now that I have heard their latest opus that was just released called "The Hungering Void", I saw that optimism for what I saw the band was capable of doing was in the end justified.

This may just a three song EP they have released...but it shows this amazing transformation of a band that never strayed from their visions. Now with such mature songwriting punctuated with staggering musicianship, they have replaced the tentativeness they had on the previous release and have risen to seriously being in contention as one of the major players in Black Metal movement...a true accomplishment from a band that I knew was already ahead and shoulders of the others but never knew it at that time.

Complex yet brutally harsh arrangements cannot begin to hide the hellish blasts that are contained on the EP. The ‘soft’ parts of the song arrangements only make it even clearer what heaviness they come with. Psychotic slashing guitars batter your very senses while the artillery styled drumming and sadistically harsh vocals seem to be coming from the bowels of the pits and takes over a unsuspecting world.

Truly, Withershin is one of those rare sort of bands that all of the other bands behind them need to learn from and fast. The swedes have taken their own grouping of influences and have shaped in words and music a hellish world that is there own making, and in their control... a world that they will drag you into it kicking and screaming into the very darkened depths of their sonic abyss. Their own destiny is in their control.