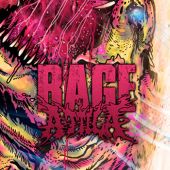 When you think of party type bands in metal, nobody thinks of Death Metal in that sort of way. You think of bands like Motley Crue, Poison and Airbourne strutting around and shaking their moneymakers for all of the little hotties in the crowd and making sure that they would be backstage after the show. Enter Attila... a band that wants to change that and still keep it nasty heavy.

Attila are trying to be almost like Obituary and the acclaimed originators of this genre Death rooming with Motley Crue then writing lyrics and then add in a wee bit of thrash for good measures. I admit, this is a bit of an odd mixture of styles that they are making... yet it works rather well. I was sceptical when I read the bio and saw that they were saying Death Party band, but Attila’s conviction to doing this shows that it really does blend well.

From the humorous track 'Girl’s Don’t Lie' to the thunderous riffing of 'The Invitation', I became amazed again and again while laughing at the comical angle of the words as well. They are great musicians, but they seem to be musicians that are trying to twist things up and make a little niche for themselves that is all their own. The lyrics are a little immature and unlike any Death Metal words... but that what just makes it fun.

Yes, the lyrics are rather stupid, but it just makes it entertaining without having to think. It is a testament to the fact that metal always changes and grows... but enjoyment is always the number one thing. It may not be the most intelligent or thought provoking of releases... but Attila’s album "Rage" is a very good indeed.