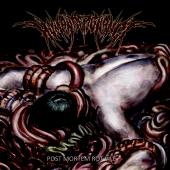 I have had the pleasure of hearing some very new upcoming Death Metal acts...some who are expanding the genre to new heights and excitingly disturbing ways. They are the future for the genre. Then an album comes out that has all the standard formula for in your face Death Metal, yet once listening to the album you discover way much more.

Human Repugnance is a very standard name for a band in the DM vein, but is this band just that? Answer is a huge scream of ‘hell no’!! Powerful, apocalyptically heavy and undeniably unforgiving as an acid enema... this band gives it to you straight between the eyes an it is a killshot. This is not only standard Death Metal, it is clearly some amazing metal that can only be appreciated at high volumes.

With riffs as sharp as a surgeon’s scalpel and bass lines that can crack solid rock Human Repugnance shocks the system with brutal music that could wake the comatose while impressing with talent. Musically sound, the band has found that perfect balancing act between menacing heaviness, unmerciful destructiveness and wicked musicality. Lyrics are a just a bit standard, but you can see that will not be the case for long.

I dislike some humans a lot (Politicians, Lawyers and people who act like know-it-alls), but I do not hate this album. They have the tools to become a well respected band in this genre Sticking to their guns will make sure that becomes a reality in a few short years. They are close to that actuality more than we all think.