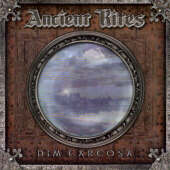 Whenever it comes to Ancient Rites, we can enjoy a history lesson. The band has style and does not sing about crude bullshit. Nevertheless, the music itself is always the most important element and Dim Carcosa does not only consist of killer tracks. Kicked off by a pompous intro which picks up again the melody of "Fatherland", the album has its highs and lows. And the intro itself makes this clear, because it’s actually good atmosphere is negatively affected by a cheesy female choir. Thank God, it delivers only a few tones.

Dim Carcosa is filled to the brim with opulent, sometimes bombastic arrangements. Honestly spoken, I am unsure whether the album really benefits from this approach. Sometimes the keyboards gain the upper hand and dilute the metallic fundament. Similar to Pavlov's dog, I hear this instrument and become grumpy. But if the truth be told, the keyboards do not mark a bad thing per se. Among other things, they play a prominent role on "Götterdämmerung" and this piece marks the album's climax. An emotional intro leads to a currish, aggressive number that possesses fantastic melodies and high-speed drumming as well. Excellent breaks shape an inspiring piece that cannot be blamed for showing any signs of laxness. The lyrics are great as well and their key message is "my only God is me". Dubious, but consistent with the song title. Too bad that the further tracks do not achieve the dizzying heights of this monument.

There are always some details that irritate the listener. An enumeration: clean or "heroic" background vocals deliver unsuitable pathos. An overdose of bombastic lines is not very helpful. The pieces need time to develop an own identity, because Gunther and his team use the same song formula again and again. The tracks are not predictable and do not follow simple, conventional patterns. But all of them mix pretty melodramatic sections with rather furious parts and it remains a mystery why the band did not write at least one or two merciless neckbreakers without soft interludes. (Exactly the opposite is happening: "Remembrance", a piano piece, stands out - due to its unique format, not in terms of quality.) Sometimes the output almost sounds like an opera, but I would have preferred that Ancient Rites would not have forgotten their roots regardless whether we are speaking of their debut, their second album or "Fatherland". Finally, a small number of songs has parts which are going nowhere ("North Sea"). All these details do not push the album into the abyss of meaninglessness, but they reduce the listening pleasure.

What remains is an album of a band that does not show its full potential. Weak choruses like that of "Lindisfarne (Anno 793)" reflect the sub-average performance. So now I get back to "Götterdämmerung" and listen to this great piece once again. Everything else fails to enthuse me and yes, I am slightly disappointed although the majority of the tunes is not really bad. Even the atmospheric title track at the end of the running order reaches a certain level of quality, yet it is a fact that there are countless albums that defeat Dim Carcosa in a matter of minutes.

Do you know what’s the worst thing about these types of records? The fact that they are ‘just’ solid. There are not many flaws on “Dim Carcosa” but on the other hand there is not enough of greatness that would make it rise well above the genre’s standard level. Ancient Rites decided to stay within the accepted and well used formula and deliver their 4th studio release, which with its ups and downs ends up as just another firm black metal CD.

Ancient Rites are a very unique band. They are one of the most respected bands in the whole black metal scene, starting from the most radical true black metal fans to the newer incarnations ala Cradle of Filth or Dimmu Borgir. Why? Because they are the precursors of the new wave of European black metal from which they never took advantage of in their promotional campaigns. Throughout the years they faced adversity, a member’s death, bad promotion, you name it, but in the end they always ended up standing tall, stronger than ever. And nothing changed this time... After switching the labels from Mascot to Hammerheart Records our Belgian quintet delivered their most complete work in the name of “Dim Carcosa”.

What we have here is symphonic black-epic-power metal mixed with very well written lyrics and very powerful guitar solos, which unfortunately are very rare in this genre. Their main brain, Gunther Theys (vocals/bass) spent countless days reading and researching European history so we could enjoy more or less known legends of the Old Continent. Just listen to ‘Victory Of Valhalla’, ‘Götterdämmerung (Twilight Of The Gods)’ or ‘Lindisfarne (Anno 793)’ to reveal their fascination and interest for the ancient history. And music... as I said before very solid with fantastic choruses, good arrangements and clean production (maybe except a bit too machine sounding drums)... And one more thing, even though this is nothing new in this genre, I’m very impressed with the simply outstanding piano parts.