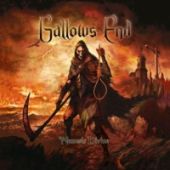 Type:
Release Date: 2010
Label: Farvahar Records
Genre: Heavy
1 Nemesis Divine (Trial Of The Gods)
2 Soul Collector
3 Kingdom Of The Damned
4 No Return
5 The Curse
6 Set The World In Flames
7 Not Your Own
8 Different Eyes
9 The End
10 The Unborn Flag
11 Storm Of Fate
12 Riders Of The North

This is straightforward Power Metal that’s adequate, but has been performed more interestingly by other bands. There’s also some traditional metal to be found within the band, though I believe it is overshadowed by the Power Metal side. The quality of cheesiness found in a lot of Power Metal is somewhat averted by the band, though they do stick to a palette that’s been performed many times before. The result is an album that is alright, but lacks the ingenuity to carry it to the next level.

Songs rollick forth in a predictable, easy to grasp fashion. The riffs are pretty good, but really standard fare and don’t do anything to grab your thoughts. There’s really nothing wrong with the performances as the guitars adequately perform the melodies necessary to carry everything across. The band has energy, but I question whether they have the necessary musical creativity to put together an excellent album. Some fans might find the by the numbers approach to be more to their liking than others. The songs certainly are catchy and memorable enough at times.

One can see some compassion put into 'Storm Of Fate' which has a nice break part way into the song. The album could use a few more exciting moments that help elevate the rest, however, as there are a lot of uninteresting riffs to be found as well. Again, the performances are competent enough, but the band lacks the passionate push that would take them to a higher stage. If Gallows End added some depth, they would improve without a doubt. Only the most rabid of Power Metal fans should give this album a shot.