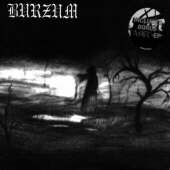 The figure that received more attention and controversy than any other black metal artist in the scene, I just can’t help but relate Varg Vikernes to Marilyn Manson. If this comparison has offended anyone who likes black metal, then listen to this CD and you’ll see that the music is just as pathetic, if not worse, than Manson’s.

If it wasn’t for his strong beliefs, which led to church-burnings, murder of Mayhem’s Euronymous, and a current jail term, this guy would not have a single fan. His music potential is so weak, and his talent on such a low scale that it’s no wonder he’s the only guy in the band. This, of course meant he had to play every single instrument including, most unfortunately, the drums. The result is a disaster.

This CD is the combination of Burzum’s self-titled debut, and the "Aske" E.P. Both releases sound exactly the same and they suck. This guy can not compose, can not play guitar, he can not play drums and most of all he sure as hell can NOT sing! Is this a fucking joke? His vocals sound like some pig or horse being slaughtered! He calls this ingenuity? These are the worst vocals (I don’t even wanna call them that) I have ever heard in my life! Well, maybe that guy from Bethlehem is worse. Whoever can enjoy this garbage is sick. Of course it was probably his intention in the first place for people to say this about him and thus make him seem more dark or evil or whatever. Which, in turn, makes his fans feel the same way and then they start thinking that Satyricon and Marduk are sell-outs and only he himself is listening to truly dark music.

I understand this music was meant to be dark and primitive and invoke feelings of scary forests and Viking gods and sadness and Tolkien but, dammit, it just SUCKS!

I’ll give it a bonus of at least having a good beat, which really makes songs like 'Ea, Lord of Destruction' or 'War' sound lively and fun. Although I’m sure he didn’t -want - the beats to be so simple, if he knew how to play the drums a little he could have mustered something better but his incompetence was a good thing in this case. The guitar tech is cheap and sounds horrible. It’s not his fault that he can’t afford a decent amp but it IS his fault for writing such shitty music to begin with. If you can sit completely through the last song, which is more repetitive than a clock, then I sympathize for you on sacrificing 10 minutes of your life for such a pathetic cause.

Bottom Line: This is far, far below it.