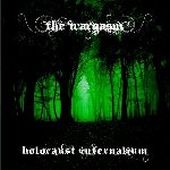 Melodic Black Metal is somewhat of troubled sort of thing when it all comes down to it. It is either done right and it agrees with your darkened souls or it is so bad that you want to run away screaming and vanish into oblivion of a bottomless abyss. Finnish act The Wargasm now boldly enters the Melodic Black Metal arena to stand and be counted. Let us see if we let them live or if they can be left to die in that arena.

With six members in the group, it seems that the band is going for that big sound that Black Metal needs in it’s infernal heart. They succeeded and then some to bring the darkness out and I hear a very slight influence of Viking Metal at moments, which only adds to the power this band has. It seems to melt together, and bring the dark majesty of it all flow out effortlessly.

Strong song structures and impressive lyrics makes "Holocaust Internalium" one effective album, one that every good Christian will explode into hellfire and consumed by it on just listening to it. I would pick the best tracks to tell you about, but there are so many that I will just have to let you readers pick it up the CD and hear it for yourselves.

The Wargasm is one in a million band, showing that BM is a genre that is always been underestimated even in the world of metal. With power and passion like this, more mainstream bands needs to take a page from them the band is the real deal.