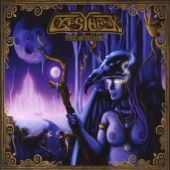 This is traditional metal with a definite rock tinge. It’s difficult to find parallels to the band’s sound, but they sound sort of like Blue Oyster Cult or other greats. There’s also a slight hint of the bluesy aura that outfits like Kyuss produce. What’s to be found here is a classic sound that has a real love for a lot of older material and isn’t ashamed to show it. The groove present is one you’ll not only find in a lot of early metal, but also a lot of older rock. If metal fans listen to Gypsyhawk expecting rock-like or groove-oriented material, they should be able to appreciate it more.

Guitar riffs are crisp and catchy perfectly suiting the type of music they’re trying to perform. The album has an uplifting vibe, but thankfully strays from becoming cheesy. Instead it sticks to down to earth riffs that are compelling despite being relatively simple. For an example of a gripping moment, see some of the instrumental breaks in 'Commander Of The High Forest' that are just brilliantly done. The entire disc manages to uphold the amount of passion and purity put into the material, however. Musically, the guitar work is solid, but not overly indulgent. Similarly, the vocals are held within a reasonable range, but manage to add a tinge of authenticity to the material.

The whole album is constructed with a high level of care to the quality of every note and it makes for such an enchanting listen. It all comes to a high point on 'The Rabble And The Ruled' as well, towards the end of the disc. This album comes not only recommended to metal fans, but also all fans of good music in general. It’s glad to see a band having fun with their performances and translating their enjoyment into quality material.