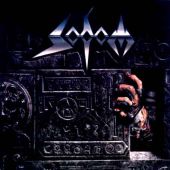 Last night the new Sodom line-up entered the stage for the first time and the first 30 minutes were filled to the brim with classics of their meanwhile almost antique releases. Inter alia, "The Saw Is the Law" was performed. This shows the unbroken enormous popularity of the band's early works and Better Off Dead belongs to these classics - partly. On the one hand, it houses extremely strong tracks, on the other hand it is the first album where Sodom present a less furious inferno. "The Saw Is the Law" is a good representative of the record, because it combines the mid-harsh approach with a very catchy line. It is not known whether Lemmy (R.I.P.) cried when he heard this song for the first time, but he surely realized that this mid-paced, pretty simple tune would have enriched every Motörhead album as well. However, on Sodom's fourth full-length is not much left from the primitive brutality of In the Sign of Evil, the experimental vehemence of Obsessed by Cruelty or the surgical precision of Expurse of Sodomy.

Of course, Angelripper and his companions did not completely cut their roots. "An Eye for an Eye", the blustery opener, wants to be close to the songs that made "Agent Orange" to such an unexpected success and "Shellfire Defense" knows no mercy. A straightforward, fast-paced bullet invites the listener to a thrash metal headbanging session. Was this piece already written in 1986? I think so.

After the three killers at the beginning, the remaining material does not stack a lot of points. Two cover versions of Tank (acceptable) and Thin Lizzy (useless) dilute and lengthen the album without adding a significant value and songs like "Capture the Flag" provide a mix of rather tedious mid-tempo parts and some fast sequences that seem to have an alibi function. These tracks do not destroy the album as a whole, but the comparatively weak riffs and the noisy solos of Hoffmann are slightly annoying. "Bloodtrails", for example, shows these symptoms and even solid, but not outstanding songs like "Never Healing Wound", which offers an evocative chorus and a straight pattern, push it into the background. By the way, good choruses are not matter of course on Better Off Dead and in particular the title track fails in this respect. The amateurish chorus kills the actually decent tune, but the following "Resurrection" is even worse. A lame rhythm and strange choirs at the end go hand in hand with a bloodless chorus.

After (too) many average tunes, Sodom have a final ace up their sleeves. The intensive "Stalinorgel" is no compositional miracle, but it brings back some percent of the charming naivety of their very early days and creates a placably finish. Better Off Dead, seemingly equipped with a good budget for the recording session, has a couple of tracks that make it impossible to ignore it, but too many mediocre songs prevent a deep relationship. It is a typical album from 1990, when the dogma of pure thrash had already begun to crumble, and it does not spread the spirit of the real "Sodomania" - at least from my point of view.