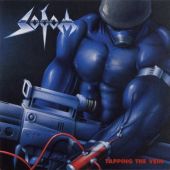 The kings of thrash metal Sodom have released tons of great albums, but this one is obviously their peak. There isn't anything wrong with this album in the slightest. Any thrash fan or metal fan in general can listen to this album once and instantly like it. This is the purest and bestest thrash metal I have ever heard in my life, above any other band out there. This album proves that Sodom means business when making their music, and that they don't hold back at all. Every song is just pure ultimate talent, every song is unique and amazing. Even though Sodom is thrash, this album is more of a thrash/death kinda thing. It has the speed and sound of thrash, but the aggressiveness and power of death metal. This record here is the band's heaviest.

Specifically what I like the most about this album are the drums. Everything about them is very pleasing and great. The sound of the drums is tight and solid, which is important in thrash since lots of thrash has fast, constant beats. The playing ability of the drums are damn great as well, especially on the opener 'Body Parts'. The song starts with a few hits and then an incredibly fast section of drumming that introduces the style of the album. Fast, furious, aggressive, and extreme! The guitar fits well will the drums perfectly. It has a very heavy sound which is literally perfect for thrash. The drums and guitar go 100% hand-in-hand here. Heavy guitar + heavy drums, with speed and consistency makes the ultimate heavy thrash metal album ever!

The band members also came up with some amazing riffs and bass lines too. For example, the track 'Bullet In the Head' has a punk rock-type riff, and the bass line is extremely punkish too, which is so amazing. You'd probably expect this album to be a little repetitive, but it’s not AT ALL. Every single track on here is great and fresh. Every song full of energy and pure WAR and RAGE! And like always, Sodom is back at it again with the awesome lyrics about war! Lyrics that describe full-on blood, sweat, and tears through the long and tedious war. Songs here vary in lyrical content to talking about the war and which what happens in it, and POV experiences with the war and personal reflections of people who have fought in the war. Once again, every song describes something new from the other! This record has so much variety and excellency.

This was also Sodom's last album to feature their original drummer Chris Witchhunter. It sucks that he had to leave the band, but at least he left the band on a great album with such a great performance!

Pros: Literally everything. All instruments sound great.
Cons: Nothing at all.

Persecution Mania and Agent Orange may be amazing, which they are, but this album is far more superior to me. Listen to this album if you haven't already, this is serious GOLD.

Sodom's discography is full of ups and downs, but one thing is certain: the band, in particular Tom Angelripper, never lacked integrity. By contrast, Mille Petrozza is just a soulless profiteer (with a compositional talent, no doubt about it). He plays the self-reflective guy in interviews, but Kreator lyrics and videos often put the focus on cheap effects. Just take a look at the repulsive "Gods of Violence" video on YouTube, the newest visual shit of Mille's circus. Anyway, Angelripper's honesty and uprightness are the main pillars of his art and therefore I accept his relatively wide creative leeway in any respect. Nevertheless, I am glad about the fact that Tapping the Vein shows a very generic side of Sodom and this was no matter of course after the relatively lame Better Off Dead. One must ignore the bad artwork and the first two songs that remain faceless (surprising idea to put the downer at the beginning of the album) in order to get brilliant stuff of the band. As the album develops, only "Deadline" fails to impress in view of its comparatively vapid riffing. In contrast, the further eight songs take the listener by the hand and bring him to a nice place in the universe of pretty violent, sometimes punk-inspired thrash metal.

Indeed, there are a couple of insidious, rapid, straight bullets that illustrate the closeness between punk and Sodom's approach. "Back to War" gives me the impulse to march immediately to the next registration office for volunteers, "Bullet in the Head" adds a catchy touch and Witchhunter's drum intro works as an identifying feature. "Hunting Season", don't be fooled by its rather ordinary beginning, is cut from the same cloth, but the closer expands the offering of Tapping the Vein significantly. The sinister, epic, partially keyboard-based "Reincarnation" fulfils its mission excellently while taking the audience to the border between this world and beyond. This majestic, anti-religious colossus is not a typical Sodom composition, but it marks a worthy conclusion of the album, which cannot be blamed for half-heartedness or listlessness. The band has penned enough good material for a solid long player. No doubt, Tapping the Vein does not lack substance.

The further tracks commute between the stylistic specifications of the songs that I have mentioned in the second paragraph. "One Step Over the Line" impresses due to its bulldozing guitar work and the sustainable chorus, "Wachturm" contributes a funny component (if one likes pretty anti-social, more or less insulting humor), the title track puts the focus on heavyweight riffs and dark vibrations. The stoic bass, the devastating double bass drum and the imperious guitar create an ominous mid-paced intro. A break leads to a high-speed part, but the song remains catchy and purposeful, only the guitar solo does not fully convince. By the way, the partly uninspired solos are the Achilles heel of the output. The same must be said with regard to the production. Tapping the Vein does not suffer from a bad mix, but it sounds a little bit butterfingered. No big deal, I just want to give you the full picture. Yet it goes without saying that I did not expect any kind of high polished thrash. This is Sodom, not Death Angel or Testament and down-to-earth dudes like Angelripper are not interested in overly clean productions. On the other hand, I am sure that Mille ignores this album for decades. Anyway, Tapping the Vein, the last regular work with Chris Witchhunter (R.I.P.), marks neither a highlight nor the lowest point of the formation's creative work.