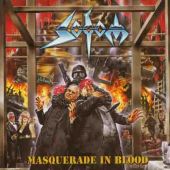 Tom Angelripper, the German answer to Lemmy Kilmister (what's going on in heaven / hell?), is among the most charismatic persons in the Teutonic (thrash) metal scene. His specific "Ruhrpott charm" is based on both authenticity and persistence. Moreover, the "Lords of Depravity" DVDs have revealed that he is able to realize his small personal mistakes. Indeed, he is not perfect, but exactly the fact that he is aware of this situation makes him all the more likeable.

Masquerade in Blood is not perfect as well, but here we have the case that its deficiencies do not increase its popularity. In other words, here we have a really weak release of a band that seemed to be immune against expressionless mediocrity. Opened by the alarmingly faceless title track, the songs pass by without gripping riffs, catchy choruses or any other fascinating elements. Especially the riffs fail to convince. Sodom rather create a constant monotonous noise than songs that score with individual details. Without being extremely harsh, some tunes are totally free from melodies and so I am listening to a porridge of noise. Okay, "Fields of Honour" has a certain Motörhead flair, but it takes more than 16 minutes until the first memorable riff shows up. This is simply too long. And don't get me wrong: "Shadow of Damnation", the piece that presents us this pretty memorable riff, stands out on this album, but it cannot keep up with the real classics of the band, regardless of their date of publication.

The songs are stripped down to the essentials and generally speaking, I like this kind of compositions. Best regards to The Ramones (R.I.P.), AC/DC (partly R.I.P.) and comparable formations. But these songs are based on a very small number of ingredients. If the first riff fails, there is no second one to serve as compensation. Either the Teutonic musicians were not aware of this or they just lacked creativity. Well, we do not need to clarify this question, because the result is what really counts - and the one-dimensional guitar work drives the album into the ground. Not to mention the surprisingly blunt vocals. The intention to offer slightly punk-influenced numbers is okay, but this alone does not create a good album. Just realize the absence of any kind of dynamic here. Tempo changes are rare, and the choruses do not crown the songs. On a positive note, they are "well embedded", but honestly speaking, they get lost in the undifferentiated noise. "Unwanted Youth" marks a pleasant exception, but it remains an isolated case.

Sadly enough, the only song that really differentiates itself from the rest is the cover version at the end of the running order due to its lenient, mid-paced structure. Too bad that it delivers another, but no better form of sounds. Nevertheless, it brings the tedious album to an end and that's a value in itself. It is nearly depressing, but the averagely produced Masquerade in Blood conveys neither good music nor emotions and the artistic idea behind this output remains hidden. Come on, Mr. Angelripper stay authentic even if it hurts and admit that this masquerade marks the weakest link in your actually strong chain of releases.