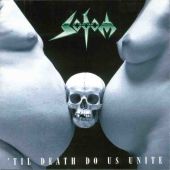 Get What You Deserve and Masquerade in Blood showed a facet of Sodom which did not make my blood boil. In particular the latter was pretty blunt and had not much in common with this wonderful sub-genre called thrash metal. Then came the here presented work and it started a new era. "Gisela", the track with the filthy German lyrics, still offered some punk vibes, but the big picture was typified by enthusiastic thrash metal. And just to avoid misunderstandings, "Gisela" is a mix of punk and thrash and its energizing straightness has withstood the test of time with great ease. It's still a joy to scream "Giselaaaaa" while driving down the highway and listening to this smasher.

The modified line-up with Bernemann and Bobby did not only feature new musicians. The entire unit called Sodom seemed to be inspired by the thought to get back to true, heavy, devastating thrash. Heavyweight monsters like "No Way Out" or "That's What an Unknown Killer Diarized" do not put the focus on high speed, but their violent approach, the integration of very formidable Bernemann solos and the sinister atmosphere have nothing to do with any form of punk influences. The same applies for the majority of the further tracks, while "Polytoximaniac", for example, marks an exception due to its simple leads. I do not know exactly why, but The Ramones (quadruple R.I.P.) come to my mind when listening to this rather funny number. The Ramones after a dangerous dose of drugs, to be precise. However, one could not deny the fact that the core competency of Sodom came to light by writing more or less pure metal songs. (Don't mess around with The Ramones in terms of punk.)

Sodom seemed to be at war with state authorities while penning 'Til Death Do Us Unite. I have no other explanation for the big amount of "socio-critical" song names. "F**k the Police" is doubtlessly not the most intelligent title, but this slogan creates a catchy chorus. Flattening riffs attack like a cop gone mad and a siren brings back the days when Judas Priest still knew how to make coherent metal tracks ("Breaking the Law"). Anyway, the song about the police is perfect - and it is great fun to shout the chorus, even if one does not agree with the its statement. "Hanging Judge" is also reaching for the stars in view of its impulsive chorus with a highly effective interaction between the lead vocals and background shouts and "Suicidal Justice", driven by Tom's roaring bass, hits the bull's eye as well. These tracks have two things in common: they offer a neckbreaking velocity and deliver bone-dry, merciless high-quality material. "Schwerter zu Pflugscharen" marks the last track with socio-critical lyrics and this time I do not need to set the word in quotation marks. The song title had been the motto of the peace movement in the GDR. Too bad that this almost melancholic composition does not follow the dogma of high speed. A heavy, solid number, but it lacks vehemence and spontaneity.

The title track is not cut of the same cloth. It does not hit the listener in the face, but the slow-moving, intense piece comes from behind and bites or kicks him painfully in the ass. Or both. Simultaneously! Indeed, Sodom's offerings are not predictable. Just compare "Hey, Hey, Hey Rock'n Roll Star" with "Wander in the Valley". The first one is just a persiflage. Sodom behave as drunken rock stars and the zany solo contributes a funny note. The dynamic, mostly mid-paced "Wander in the Valley" sounds completely different. An ironclad riff, imperious verses and a catchy yet uncompromising, up-tempo chorus reveal the force of this ingenious composition. The cynical "You will die!" announcement of Tom adds another easily memorable part. "Wander in the Valley" is the final of eight highlights, and these lights are really shining brightly.

In view of this enormous number of mind-blowing jewels, one can easily ignore the fact that the band covers a Simon & Garfunkel song. (No, this is not a grindcore combo from the underground.) Nevertheless, I ask myself why did they do this? Maybe Tom was of the opinion that he had to express his usually well-hidden romantic side. I do not know. Anyway, eight killers, six pretty decent tunes and only one downer justify a high rating. Not to mention the voluminous, absolutely metallic production. In a nutshell, this album initiated the reunion of Sodom and the thrash metal scene. What more can one expect?