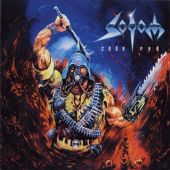 For he’s a jolly good fellow, for he’s a jolly good fellow, for he's... Sorry, I had not realized that the review has already begun. However, nobody can deny that Tom Angelripper is a jolly good fellow. Authentic and persistent, he knows a lot of good tales to tell and he always stayed true to extreme metal. (With the exception of Onkel Tom, Die Knappen and so on...) Anyway, he never released a softener like "Endorama" under the banner of Sodom and unlike Destruction, he did not need a time-out. Consequently, the artwork of Code Red shows the raging Knarrenheinz on a bloodthirsty mission. I do not like this kind of painting, but I admit that it is the excellent visual implementation of the musical content.

Code Red, the second album with Bobby and Bernemann, houses some of the most vehement songs of the band - and you surely know that Sodom's history is full of intensive attacks. One can therefore imagine that the aggressive title track leaves no stone unturned. The wall of sound wants to crush the listener and Sodom open fire. One might think that it is a fairly trite idea to kick off an album with the most powerful number. But do not jump to conclusions, because the maximum degree of ironclad heaviness has not yet been achieved. The third track combines sheer insanity with enormous pressure and the result is amazing. "What Hell Can Create" makes worshippers of extreme thrash grin contently.

This high level of intensity is a feature of Code Red, although the following songs do not only focus on high speed. "Tombstone", equipped with a Wild West aura, shows the brutality of well executed mid-tempo pieces. Angelripper's familiar voice does not lack of power and he feels obviously well due to his general affinity for cowboy stories (remember his contribution to the first album of "Dezperadoz"). Yet his vocals enrich every track, no matter what topic is being presented. Bernemann's solos do not reach the same level of brilliance. Some of them fail to leave an impact ("Warlike Conspiracy"). But his riffs have the power to split skulls, at least those that shape the highlights of the album. Almost shamefully hidden on the ninth position, one of these highlights’ attacks with sharpness and its defiant leads. Apart from these features, "The Vice of Killing" kicks asses in view of its good flow, the staccato-like bridge and the memorable chorus - even its solo part is exciting. Better still, the following tracks, "Visual Buggery" and "Book Burning" are almost on a par with "The Vice of Killing" due to their strict and merciless configurations.

The punk influenced closer kills two birds with one stone. Sodom show that they are able to perform different styles of non-conform music. Furthermore, they make clear that they do not take themselves too seriously. The extremely straight "Addicted to Abstinence" has a funny facet without being stupid. But generally speaking, more than 90% of the album are characterized by violent heaviness, metallic song patterns and a pessimistic mentality. Real thrash metal is immune against positive vibes. Thus, Code Red belongs to the better outputs of a strong discography. Thanks to the jolly good fellow.