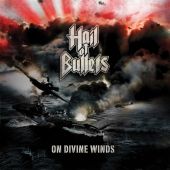 Japan is a fascinating country with a very interesting history. Kept separated from external influences for more than two centuries, the Japanese people established their very own culture and their sense of honor made it possible that their young soldiers sacrificed their lives in World War II, although the situation had already become hopeless. "Kamikaze" means nothing else but "divine winds" and it goes without saying that the suicidal attacks of the doomed pilots deliver a great story for death metal lyricists. Here we have a concept work about the war in the Pacific and Hail of Bullets do not hesitate to use the heavy artillery right from the outset.

Frankly speaking, it remains a mystery whether this band was really necessary, because its sound is very similar to that of modern Asphyx. Further Dutch flagships such as Gorefest or Thanatos have although left their mark, not least because of the "all-star-character" of the line-up. This is both a blessing and a curse. The lack of individuality, inter alia caused by the well-known vocals of Martin van Drunen, goes hand in hand with competently designed and executed death metal tracks. "On Choral Shores", for example, combines a very good flow with heavyweight guitars and well-integrated tempo changes. "Operation Z" shows the same features while adding a melancholic part at the end. The here presented sub-genre has never been a playground for very variable compositions, but Hail of Bullets make good use of their limited scope. Consequently, it does not matter that "Full Scale War" sounds like a tribute to Bolt Thrower. The crucial fact is that the album provides a dynamic atmosphere with the effect that boring sequences do not occur.

But no matter how you look at it, at the end of the day On Divine Winds is just another death metal album. I do not say that this is a bad thing, no way, and genre freaks can add five or ten percentage points. The band gives its supporters exactly what they have asked for. Unique features are missing, but sloppily composed tunes are not in sight as well. Robust riffs and an appropriate number of tempo changes create a resilient appearance. The viscous "The Mukden Incident" with its constantly firing double bass emphasises the rather doomy side of Hail of Bullets. While doing so, the song reveals another similarity to Asphyx due to the pretty slow rhythms. By the way, the lyrics of this track show the close connection between past and present. They deal with a bomb attack whose presentation in Japanese school books led to diplomatic complications between Japan and China just some years ago.

Woeful, slightly morbid guitar lines which reflect the dreadful side of war and the pain of defeat ("To Bear the Unbearable") remain exceptional. The war correspondents from the Netherlands prefer to seek the open confrontation with steely riffs and clear statements. Thus, some of the lyrics are nothing for the faint-hearted ("Tokyo Napalm Holocaust"). As an aside, I will never accept the targeted bombing of civilians as a legitimate tool. But the winners write history and one may not forget the cruelties of the Japanese army as well. Anyway, I strongly hope that Japan will be spared of further catastrophes, because my daughter will live there during the next five months. Sayonara, my beloved child. We will miss you very much and look forward to seeing you again!