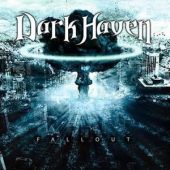 The newer versions and stylings of metal always surprise me, although sometime it is a bad surprise I have to add. They can be also very breathtaking and shows the growth that metal has done over the many years that I have been in the business, or they can be a scourge on the metal scene and be only metal in name alone.

United States based Dark Haven are the newer breed of Death/ Scream metal. Very frantic, razor sharp guitars and guttural yet nasty vocals... but that is just all they bring. They play as hard as anyone out there does in the scene, but I find absolutely nothing in the way of originality in any of the eleven tracks they deliver. The band is very relentless with its fury and ends up hitting you like a sandblaster on Styrofoam, yet the sad thing is they are like hundreds of other bands out there, and none of the qualities that would help them stand out. They have pure fire in every note they brandish, but they have nothing of real substance to back it up.

The songs are well written, but have no real sense of busting out of the normal shit the genre has to stand proudly above the others in victory. It is good that the amazing production values help out to some extent to add to the album, making it enjoyable but it still seems like that you have heard the music all before. You end up getting bored and move on, the CD put aside and will not be played very much.

I seem to linger with Dark Haven in my mind, because the band obviously have some real talent but has not used it. They should go back in and rethink what they want the band to be. If you let your talents go, you can go from mediocre to amazing with just a little work. Dark Haven have all the tools, now if they just do it, who knows what the band can do, as it is now, the band just does not cut it.